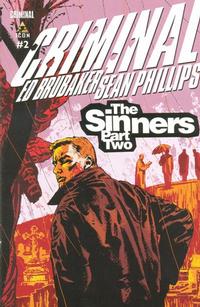 Appearing in "The Sinners, Part Two"Edit

FROM THE CREATORS OF INCOGNITO -- THE AWARD-WINNING CRIME SERIES IS BACK! One of the most award-winning and acclaimed comics series of the last several years continues – A special artistic gut punch for longtime fans or those who’ve recently gotten hooked on Brubaker and Phillips hit series INCOGNITO! Made men are turning up dead in what appear to be mob-style hits, and since criminals don’t go to the cops for justice, TRACY LAWLESS has been appointed the defacto “sheriff” of the criminal underworld by his boss, Crimelord Sebastian Hyde. But Tracy is the ultimate outsider, and the cons, murderers, and thieves don’t like or trust him any more than the police do. CRIMINAL: THE SINNERS #2

Retrieved from "https://heykidscomics.fandom.com/wiki/Criminal:_The_Sinners_Vol_1_2?oldid=1419538"
Community content is available under CC-BY-SA unless otherwise noted.