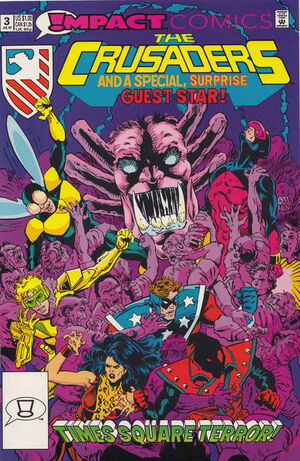 Appearing in "Slaves Of New York"Edit

Synopsis for "Slaves Of New York"Edit

The Crusaders battle an other-dimensional monster called Kalathar, who claims to be an advance agent for a full-scale invasion. Captain Commando, a member of the original Crusaders, joins the young heroes to stop Kalathar. Fireball apparently gives his life in the struggle, but is revealed to have survived.

Retrieved from "https://heykidscomics.fandom.com/wiki/Crusaders_Vol_1_3?oldid=1419918"
Community content is available under CC-BY-SA unless otherwise noted.