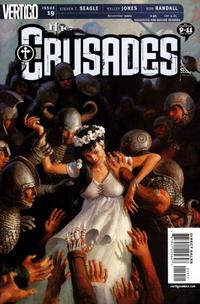 Venus tries to help Godfrey recover and regain his memory and vows to find Cela. She is constantly late, as she tries to juggle her job at the Chronicle, her undercover job at Camelot Diner, her hobby of Creative Anachronisim (re-enacting Medeival Knights), and her personal life. In addition to three front-page stories, she is dubbed “Sir Venus the Fair of Antioch”. Meanwhile, Detective Petronas is still investigating the Ash Wednesday murders.

Retrieved from "https://heykidscomics.fandom.com/wiki/Crusades_Vol_1_19?oldid=1421799"
Community content is available under CC-BY-SA unless otherwise noted.