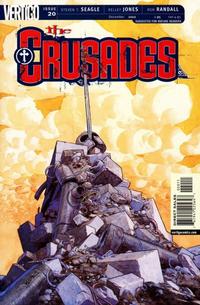 One for all and all that shit.

Venus tries to help Sir Godfrey recover and regain his memory. Finally, Detective Petronas believes he has solved the Ash Wednesday murders, but is distracted by Venus accepting the marriage proposal that he previously made. Venus also accepts a marriage proposal from Anton Marx. Venus, Duane, Sir Godfrey and the other Knights of the Creative Anachronism group raid Mr. Pope and free Father Trinidad. The Knight is revealed, and Father Trinidad reveals information incriminating Mr. Pope. The story wraps up with Anton Marx and Detective Petronas realizing that they have been had – Venus has moved out of her apartment, and has taken off to more permanently join the Knights of the Creative Anachronism group.

Retrieved from "https://heykidscomics.fandom.com/wiki/Crusades_Vol_1_20?oldid=1421800"
Community content is available under CC-BY-SA unless otherwise noted.