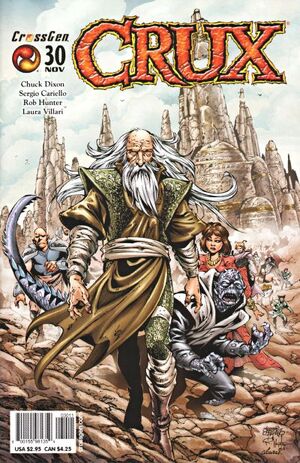 They were the Atlanteans, a peaceful civilization of artists and philosophers who used their phenomenal mental and physical skills to build an island utopia. They had but one responsibility: to guide and shepherd Earth's newborn race of homo sapiens towards a grand and glorious destiny. But when a mysterious cataclysm plunged Atlantis and its people beneath the waves, six - and only six - were awakened by a nameless stranger one thousand centuries later to find their utopia forgotten and in ruins, their brothers and sisters caught in an unshakable slumber... and the human race gone, having vanished centuries ago in the Transition, a passage to a higher plane of existence.

The Negation is defeated. For now. The remaining Atlanteans have been awakened. But it is to an Atlantis they do not remember, a place of ruin and decay and loss. At the same time Aristophanes and his fellow fugitives are threatened by... ninjas?

Retrieved from "https://heykidscomics.fandom.com/wiki/Crux_Vol_1_30?oldid=138627"
Community content is available under CC-BY-SA unless otherwise noted.