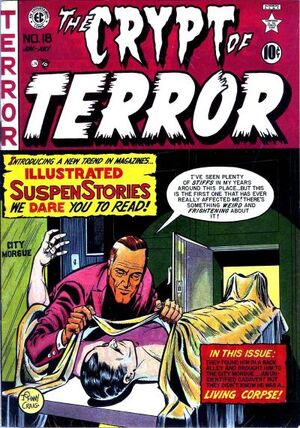 Appearing in "The Maestro's Hand"Edit

Synopsis for "The Maestro's Hand"Edit

Dr. Hellman arrives at a cabin in the woods to forget the suicide of his ex-fiancee after he unnecessarily removed the injured piano hand of her lover and he killed himself. When he opens the package he finds upon his doorstep, the detached hand lunges for his throat. When police arrive later, they find the doctor dead from self-strangulation.

Appearing in "The Living Corpse"Edit

Synopsis for "The Living Corpse"Edit

A magician strikes his assistant while wearing a snake ring and then attempts to locate where her body was taken by playing dead himself as to remove the snake imprint evidence. He assaults the morgue attendant but is locked into the freezer while the attendant suffers a heart attack and is thus doomed to freeze to death.

Appearing in "Madness at Manderville"Edit

Synopsis for "Madness at Manderville"Edit

When Tom Mander and his wife lose their son Billy, Tom worries the strain may be driving her insane when she tells him that she sees and hears things he cannot. When they find a butcher knife soaked with blood in the kitchen and the dog in the cellar with its throat slashed Tom takes his wife in to see a doctor who has Tom committed to an insane asylum when his discussion reveals to the doctor that Tom cannot perceive sights and sounds that actually do occur.

Appearing in "Mute Witness to Murder!"Edit

Synopsis for "Mute Witness to Murder!"Edit

A woman sees her neighbor doctor murder his wife and is struck dumb from the shock. Her husband summons the very same doctor and he realizes what she must have witnessed and has her committed to an asylum. He realizes that her voice may return at any time so he schedules her for a brain operation in which he plans to 'accidentally' kill her. Her voice does return and when his heart gives out without his medicine during their struggle, she chooses to let him die rather than summon aid in time.

Retrieved from "https://heykidscomics.fandom.com/wiki/Crypt_of_Terror_Vol_1_18?oldid=106933"
Community content is available under CC-BY-SA unless otherwise noted.