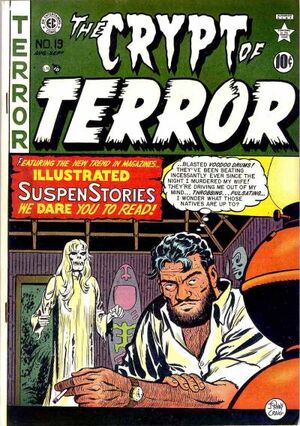 1 of 4
Add photo
A man and his wife are flying in a small plane when a thick fog arises and they are forced to put down at sea. Using a lifeboat for a couple of days they come across a rotted ship. Reading the ship's log they learn the mutinous crew died one by one after being cursed by the captain they forced to walk the plank. The man sees a ship heading towards them and are afraid they are going to be rammed, but the ship passes right through where they are standing! They get in their lifeboat and are rescued but the captain does not believe their strange tale of the ghost ship.

Appearing in "The Hungry Grave"Edit

Synopsis for "The Hungry Grave"Edit

A woman hates her husband so she gives him small doses of arsenic trying to work up her nerve to finish him off, but all she succeeds in doing is allowing him to develop a tolerance to the stuff. When he overhears her plot to leave him in a sack for her lover to bury in a dug-up grave, he poisons her instead and puts her in the sack so that the lover buries her not quite dead. Then, he kills the lover with an ax.

A man thaws out after 200,000 years in ice and attacks his exhibitors.

A plantation owner with a young wife hates the kindness she shows to the natives. He bursts into one of their voodoo dance rituals and shoots her dead for partaking. The natives turn her into a zombie and send her after him for revenge. Firing useless bullets, he flees into the jungle where he falls into a bog of quicksand and she joins him in eternity.

Retrieved from "https://heykidscomics.fandom.com/wiki/Crypt_of_Terror_Vol_1_19?oldid=1147310"
Community content is available under CC-BY-SA unless otherwise noted.