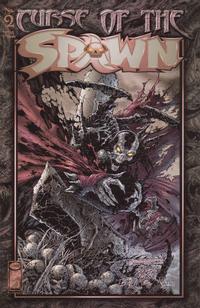 Memory flashes of Daniel Llanso's past reveal few clues to his present situation as this future's Hellspawn. Madrid, frightened by witnessing the Hellspawn kill the Desiccator, turns her spinner on him and fires while Matthew recognizes him as his uncle. As they flee the area, they battle the Nightmares and manage to commandeer an Armored Personnel Carrier. Meanwhile, as the Hellspawn recovers from the blast, the demon, Abbadon initiates a genocidal mission. Elsewhere, the Anti-Pope visits the Nu-Vatican chambers where he guts a prisoner named Abel.

Retrieved from "https://heykidscomics.fandom.com/wiki/Curse_of_the_Spawn_Vol_1_2?oldid=1420185"
Community content is available under CC-BY-SA unless otherwise noted.