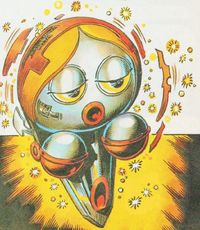 Cutie was a Robo-meter, a robotic scanning device in a vaguely female form which Robo-Hunter Sam C Slade usually carried on his belt. Cutie assisted Sam for some time until her apparent 'death' on the robot world of Verdus.

Years later, Cutie supposedly returned and, having gained a fully mobile humanoid form, tricked Sam into trusting and even loving her before attempting to kill him for abandoning her. However, this story was set during Mark Millar's rebooted Robo-Hunter series, so it's probably best ignored.

In her original form, Cutie was pretty much immobile.

Carried around by Sam.

Retrieved from "https://heykidscomics.fandom.com/wiki/Cutie?oldid=688875"
Community content is available under CC-BY-SA unless otherwise noted.