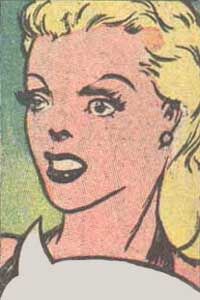 Later, she became a secretary at the Daily Express and worked with a man named Perry Chase, who was secretly the Press Guardian. Cynthia eventually learned that they were actually one and the same man and became only person privy to his secret identity.

Soon Cynthia begins aiding the Press Guardian on his adventures and also became his girlfriend. Their greatest foe was a man known only as the Claw.

Retrieved from "https://heykidscomics.fandom.com/wiki/Cynthia_Blake_(Earth-MLJ)?oldid=1566312"
Community content is available under CC-BY-SA unless otherwise noted.