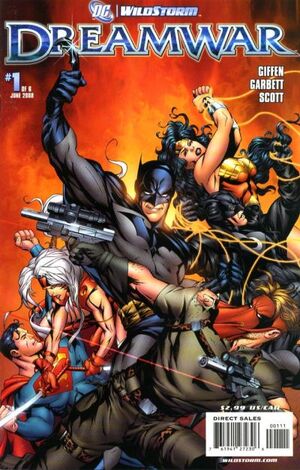 In Happy Harbor, Rhode Island, the town is engulf by a large tidal wave. The natural disaster is caused by an emerging island, the Secret Sanctuary, in which members of the Justice League appears out of the landmass.

In the Bleed, The Authority analyze the event in Happy Harbor and as well another similar occurrence simultaneously happening in the Aegan Sea. Furthermore, there are also strange phenomenons happening elsewhere including the appearances of Titans Tower on Rikers Island in New York and a crashed space rocket in Siberia.

At Rikers Island, Jack Marlowe and the Halo Corporation are monitoring Titans Tower as the prison is under lockdown. Marlowe had called Majestic who is then dispatch into entering the tower. Upon entering the building, Majestic is attacked by the Teen Titans, who then burst out of the structure and makes an escape attempt. While most of the Titans managed to escape, Majestic pursues Kid Flash and Marlowe enters into combat with Cyborg. Kid Flash escapes from Majestic, but Cyborg is subdued by Jenny Quarx and The Authority.

Meanwhile in Tranquility, the elderly Maxi residents Kevin Trueblood, Captain Cobra, Bad Dog, and Pink Bunny are playing a card game and are met by a trio of seemingly normal men, who wants to know about their town. The three then introduces themselves as Alan Scott, Jay Garrick, and Ted Grant.

In Siberia, Stormwatch is sent there to assist the Russian military in overseeing the crashed spacecraft in the event of a metahuman event. The Russian commanding leading the operation is greatly oppose to Stormwatch's intervention; in which without confirmation from Moscow's approval, Stormwatch is kept from approaching the spacecraft. Hidden among from Stormwatch, Chameleon Boy and Invisible Kid from the Legion of Super-Heroes spied on them. They return to the spacecraft as they are given the notion that Stormwatch and the other heroes are villains.

Somewhere in a trailer park in Larkin, Arkansas, Superman enters one of the trailers where a dead man has his throat cut and appears inside the bedroom of a young teenager, who is asleep. Superman tenderly touches the teenager's face and saying "Never again."

Retrieved from "https://heykidscomics.fandom.com/wiki/DC/Wildstorm:_Dreamwar_Vol_1_1?oldid=1422249"
Community content is available under CC-BY-SA unless otherwise noted.