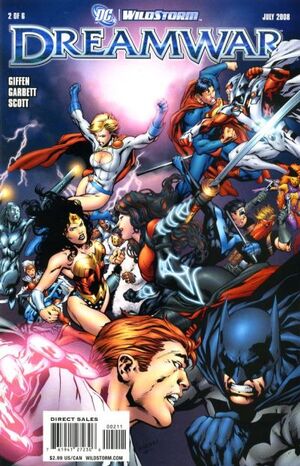 In Siberia, the Legion Super-Heroes studied the heroes of the Wildstorm Earth from hacking into the planet's computer systems. The Legion concluded on their observation that Earth's metahuman population have an iron hand over the planet, especially coming from The Authority. The Legion plans to make an preemptive attack on Stormwatch similar to what the Titans did on Gen 13, while the Justice League are planing to attack The Authority according to "Chimera-Lad", who wants these heroes dead.

On the Carrier, The Authority, Jack Marlowe and Majestic study a captured Cyborg. The Engineer sets up communication with Cyborg, who accuse his captors that they are not close as actual heroes and forewarns of the Justice League. As Cyborg has warn, the Justice League breaches into the Carrier and neutralizing Swift and The Doctor.

Meanwhile, Midnighter and Apollo are in the Aegean Sea observing an emerged Themyscira while Jack Hawksmoor is assessing to the damages in Athens. They are then quickly summon back to the Carrier. The Authority, Majestic and Marlowe fights the League in which Green Arrow is killed by Midnighter. Ultimately, Apollo, Midnighter, Majestic and Marlowe are incapacitate and capture by the League as the rest of The Authority are forced to retreat.

In Tranquility, the Maxis are likewise involve into a fight with Alan Scott, Jay Garrick, and Wildcat, who shed their true identities. In which they are then join by the rest of the Justice Society.

Retrieved from "https://heykidscomics.fandom.com/wiki/DC/Wildstorm:_Dreamwar_Vol_1_2?oldid=1422250"
Community content is available under CC-BY-SA unless otherwise noted.