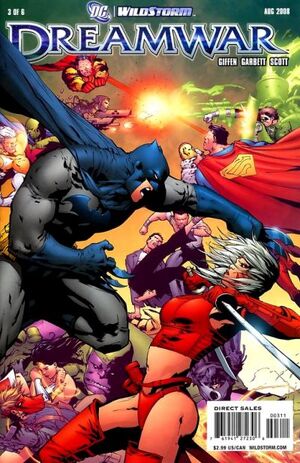 The Legion makes their attack on Stormwatch and the Russian military, whom they display a match of brute force which greatly disturbs Bouncing Boy. However, Stormwatch puts up a fight in which Element Lad is killed by Hellstrike before pulling out.

The Authority turns up at the Halo Corporation in Los Angeles where they explain of their hasty retreat that transpired on the Carrier to Zealot. In turn, Zealot informs The Authority that according to Halo's joint alliance with Stormwatch, the emerging heroes are using unprovoked attacks and, to her military assessment, judges that this is not a mere conquest. All they can do is narrowing their option in reaching to all available metahumans into autonomous strike forces against these new heroes. Suddenly, Zealot and The Authority are tracked down by Superman, Green Lantern, and Batman.

In Tranquility, the entire is turn into a war zone as the empowered townspeople battle the Justice Society. Fortunately, Grifter and the Wildcats have arrive to assists the townspeople. Wetworks, with help from the Vampire Nation, is dispatched to the Aegean where they face an army of Amazons.

Back at Halo's headquarters, Zealot and The Authority engages Superman, Green Lantern, and Batman. Zealot faces with Batman and two enters into a furious battle in which Zealot kills Batman. Superman quickly stops fighting and, in his horror, rush over to Batman. A wounded Zealot tells Superman that they fought fairly and acknowledging how Superman cares for her opponent, willingly allow herself to be kill to avenge Batman. But Superman, coming to his sense from seeing his friend's death, refuses and tells Green Lantern to stop fighting as he then realizes that he and the League's actions goes against their moral judgment. Furthermore, they never even care about Green Arrow's death in which Superman then questions as to why he and the other heroes are doing here. Superman is then contact by J'onn J'onzz who answers that "Chimera wants this done." In which Superman then questions as to who Chimera is.

In Larkin, Arkansas the young teenager that was visit by Superman mutters in his sleep with the word "no".