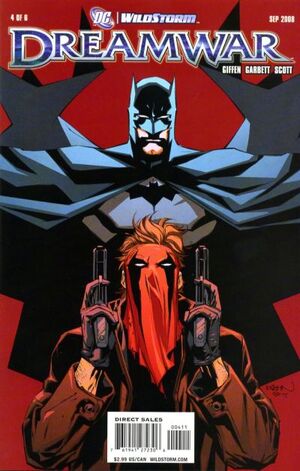 Stormwatch regroups with the remnants of the Russian military as they receive reinforcement from Deathblow and Warblade. They are then engage by the Legion.

On the Carrier, the Justice League makes peace with The Authority and other heroes, in which the former are currently trying to contact with the other heroes into ceasing their attacks. Superman tells the Wildstorm heroes that he and the other heroes are not native to this world, but are "born" into it by Chimera, the sleeping teenager who lives in Larkin. The Doctor gives his analysis on Chimera as being capable of manipulating reality. This raises the question from Jenny Quarx as to why Chimera would go through the trouble of summoning heroes like Superman instead of simply wiping out the Wildstorm heroes with his given powers. This perks The Doctor's curiosity who decide to consult with his predecessors about this. Although, Superman sees that Chimera's views on the Wildstorm heroes as being "villains" are not completely wrong, as they have no problems in killing lives.

The Doctor enters the Garden of Ancestral Memory and informs his predecessors about the situation and Chimera. He then learns from the Doctors that the DC heroes are acutally conjured from Chimera's dreams - the only ability to his limited manipulation of reality - from accessing to the Athenaeum, a dream world housing the collective dreams of all mankind, in which he had stolen a book pertaining to the DC Universe. Also, the Doctors informs that Chimera was to become the next Doctor after Jeroen Thornedike's death but was rejected due to his reckless vanity and lack of discipline.

Elsewhere, the Justice League manage to convince the DC heroes to stand down. Wonder Woman stops the Amazons from engaging Wetworks in the Aegean; In Tranquility, Green Lantern stops the fighting between the Maxi and the Justice Society. In Siberia, several Legionaries are killed in their battle with Stormwatch before the Flash cease the conflict; in which the Legion comes to their senses after Bouncing Boy remind his team's mantra of never taking a life. In New York, Gen 13 continues to battle the Teen Titans in which the Atom attempts to intervene but is knocked unconscious and is step on.

Meanwhile, The Doctor enters Chimera's dream. He talks with Chimera for his actions, in which Chimera reveals his background that he had been living an abusive life ever since his mother passed away and believed that the heroes of his world are worse and responsible for his mother's death and his life. The Doctor tries to reason Chimera to stop what he is doing. In the real world, Apollo and Midnighter are waiting outside of Chimera's home and are awaiting for The Doctor's negotiation. Although Midnighter is impatient and wants to end this soon by ending Chimera's life. But, Apollo keeps his husband at bay. Suddenly, Apollo is grab by the neck by Chimera's newest summoned being: Doomsday.

Retrieved from "https://heykidscomics.fandom.com/wiki/DC/Wildstorm:_Dreamwar_Vol_1_4?oldid=1422252"
Community content is available under CC-BY-SA unless otherwise noted.