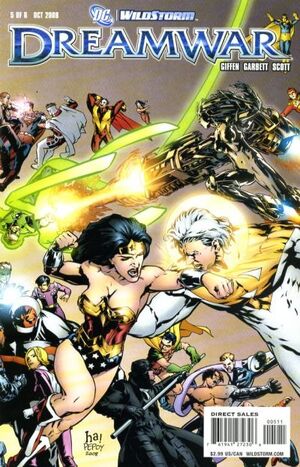 Appearing in "Bad to the Bone"Edit

Synopsis for "Bad to the Bone"Edit

Chimera continues his attacks on both the Wildstorm and DC heroes by conjuring villains from the DC Universe. Jenny Quarx finally decide on telling her parents in killing Chimera to end the situation; however, this is strongly oppose by Superman who reasons that there has to be another way beside killing the boy. Apollo and Midnighter informs Jenny and the others about Doomsday, in which Majestic volunteers in assisting alongside with Superman. Majestic also reveals the reason he trust Superman is that he previously visited the DC Universe and met the real Superman.

Elsewhere the heroes engages the villains. In Tranquility, Jay Garrick and Grifter works together in coordinating the townspeople and the Justice Society into decisively beating the villains. In Siberia, the Legion, Stormwatch, the Flash and the Russian military engages the Weaponers of Qward. In the Aegean, Wonder Woman and Wetworks battle Cobra and Starro and its spawns; in which the battle quickly ends with Starro's defeat from latching one of it's spawns onto Ab-Death. The Teen Titans are convince to teaming up with Gen 13 by Cyborg against the army of villains. The Halo Corporation is likewise attack and reinforce by Jack Hawksmoor, Zealot and the other members of the League.

Superman and Majestic arrives in Larkin and helps Apollo against Doomsday. This allows Midnighter the opportunity to go after Chimera, but is found himself at gunpoint by the Joker.

Back on the Carrier, The Doctor returns and inform Jenny about Chimera, whom he had ejected The Doctor out of his dream state, and unable to directly stop him in his dream in which he strongly controls. Given their observation on Chimera, The Authority determine that the conflict will end either if Chimera is waken from his dream or killing him.

Midnighter is force to flee from the Joker, as attempting to gain a read on fighting Joker ends with no results. Apollo is brush away by Doomsday and interfere with Midnighter and Joker, whom he then kills the latter. Midnighter continues his intent on ending Chimera, but Superman overheard this and prevents him from doing so. Superman flies to Chimera's home to wake Chimera, but finds him to have disappear.

In the dream world, Chimera sees his plans are falling apart as he then realizes that the reasons the villains are losing is because heroes always win in the end. He reads through his book in an effort to wipe out all the heroes.

On the Carrier, The Authority sees the battle against the villains is subsiding and are puzzle of Chimera's whereabouts. The Doctor enters into discussion with his predecessor Jeroen Thornedike, who warns that Chimera is summoning much worse than super-villains and plans to destroy Earth. When the Doctor question Jeroen of what this new threat is, he focus his attention towards the planet's moon.

Retrieved from "https://heykidscomics.fandom.com/wiki/DC/Wildstorm:_Dreamwar_Vol_1_5?oldid=1422253"
Community content is available under CC-BY-SA unless otherwise noted.