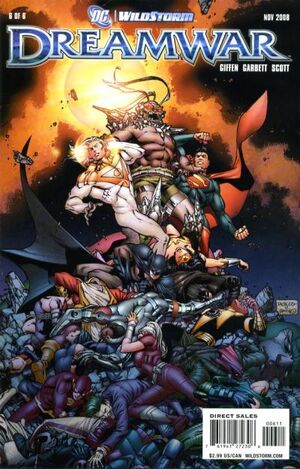 That... was one bad damn dream.

Appearing in "...Perchance to Dream"Edit

Synopsis for "...Perchance to Dream"Edit

The Doctor revisit Chimera's dream state and ask Chimera what he is trying to accomplish at the cost wiping out all life on Earth. Chimera yells out that "Heroes save the day!"

In Larkin, Superman, Majestic, and Apollo have defeated Doomsday.Contactsontacts Apollo and asking him and the others to look up at the sky, which they see a mass of energy starting to hatch out of the moon. On the Carrier, The Engineer analyze that whatever is happening on the moon is a global disaster scenario if not an extinction event. The Green Lantern makes a close observation of the moon with his power ring, and learns that it is birthing a Sun-Eater.

In Chimera's dream, The Doctor tries to reason with Chimera of what he is doing is ending billions of lives including himself. He then ask what he he wants in the end, Chimera answers that he "wanted them [the heroes] to save the day."

The Wildstorm and DC heroes gathers on the Carrier where Brainiac 5 explains them the nature of the Sun-Eater and that there is nothing to stop it from devouring Earth's sun. The heroes' only hope to save the world is finding Chimera and either waking him or killing him. It is also pointed out that waking Chimera would erase the existence of the DC heroes, and are also unsure if killing Chimera's physical body would permanently keep him in his dream. Theoretically, his death could be the same as his never waking up. Although, despite Brainiac 5's scientific reasoning, they still need to stop the Sun-Eater in which The Authority believes that Jenny may be able to kill the Sun-Eater as similar to what her predecessor Jenny Sparks did to the "God" being. It is then put forward that Jenny accompany by Superman, Apollo, Majestic, Alan Scott, and the Legion will deal with the unhatched Sun-Eater while the rest of the heroes will find Chimera.

The Doctor continues to reason with Chimera, but his efforts are for naught given to Chimera's ego and fail to find any emotional root that might explain Chimera's action. He distastefully leaves Chimera's dream.

In Larkin, Midnighter returns to Chimera's home believing that Chimera is still there hiding in plain sight. He is join by Raven, who also shares Midnighter's suspicions. They enters Chimera's room to find any traces of him, but are attack by the Shadow Thief. He is eventually subdue by Raven, who allows her to share her mind into Shadow Thief. Both Midnighter and Raven realizes that Chimera is still in his bedroom.

On the moon, the heroes engages the Sun-Eater. Jenny is taken by the Sun-Eater and prepares to shock the entity with her powers. But she is reluctant as she is unsure if she will detonate it or hatching it. She is then contact by Midnighter that he and Raven have found Chimera with the help from The Engineer, which Chimera had shrunken himself with the Atom's tech. They are awaiting Jenny's order on either killing or waking Chimera. Superman recommend in waking him as killing him will still have the same effect in erasing him and the other heroes, in which they are willing to take in saving the day. Jenny concede to Superman's advice and orders Chimera to be awaken. The Engineer awakes Chimera.

A scene later, the Wildstorm heroes suddenly finding themselves waking up from their beds. Jenny gets out her bedroom and runs to the Carrier's bridge to turn on the news, in which reports of the DC heroes and villains and places like the Secret Sanctuary have all disappear without a trace except for the damages that still remains.

Meanwhile, The Doctor arrives to the Athenaeum where he returns Chimera's stolen book to its dream keeper, Morgana. He explains to her that he has punished Chimera into a permanent waking state, thus preventing him from ever using his powers. With the book return, Morgana then ask The Doctor of expecting "the rest of it?" She reveals that there are pages missing from the book. The said missing pages are seen fluttering above in a wooded area where children are playing.

Retrieved from "https://heykidscomics.fandom.com/wiki/DC/Wildstorm:_Dreamwar_Vol_1_6?oldid=1422254"
Community content is available under CC-BY-SA unless otherwise noted.