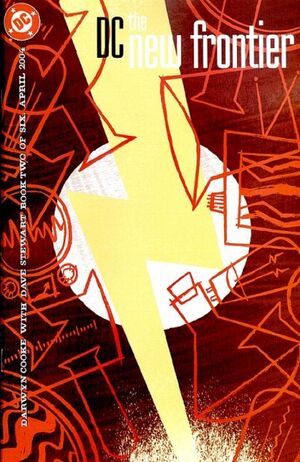 You know I'm not one of those flag waving simpletons, but I do believe a free world is worth fighting for. The men I've killed... I like to think of them as soldiers, who believed in what they were fighting for. Honorable men. You understand?

In 1955, on the outskirt of Gotham City, Dr. Saul Erdel is dying from a heart attack in his observatory due to the surprise appearance of the Martian J'onn J'onzz. Erdel, with his dying breath, apologize to the Martian for teleporting and stranding him on Earth as his original experiment was meant for making contact with alien radio signals. With his final words, Erdel warns J'onn J'onzz about humanity's fear and violence, and urge that he must not reveal himself.

Meanwhile, Superman and Wonder Woman are in Indochina on an humanitarian aid during the Vietnam War...

Superman is appalled to discover dozens of slaughtered political soldiers. Superman trace the killings to a hut and finds Wonder Woman celebrating with a group of armed women. The Amazon explained to him that after she was sent by her American superiors to retrieve a down C-47 transport plane that had an American crew in Cambodia, she immediately noticed on the way to Laos a rebel base imprisoning abused women. After having dealt with the rebels she allowed the freed women to exact their own brand of justice upon their captors, which horrified Superman. As the Man of Steel argues what they suppose to set an example, Wonder Woman heavily rebukes that what she done was right given that "a smile and a box of flags" doesn't help the women and everyone in the war who lost their family and loved ones. Though Superman has to report what she did as a strict violation of their protocol, but Wonder Woman points out that there are "no rules" in this war and tells Superman that "There's the door spaceman."

Back in Gotham, J'onn J'onzz has learned that Dr. Erdel's device couldn't return him to Mars and has been living quietly under the guise of Dr. Erdel while learning what he can about humans and Earth society through television. He shape-shifts into different guises during his nightly viewing, such as Groucho Marx and Bugs Bunny, before settling on the form of a film noir detective, taking the surname of John Jones.

A year later, in Central City, a news reports of a lightning strike that hit Central City Police Headquarters causing thousand of dollars in damages. However, Police Scientist Barry Allen was struck by the lightning but survived without any serious injuries.

By 1957, the Soviet Union has launched Sputnik 1 and later Sputnik 2 which mark the feat of successfully launching a dog into space. In response, President Eisenhower pledges a massive funding for an American space program to match the Russian's effort.

John Jones joins the Gotham City Police Department and with his integrity, cunning analytic skill, and telepathy, quickly rises to the ranks of detective and teams up with his fellow detective Slam Bradley. After investigating a kidnapping of a child which was later discovered to be part of a sacrificial ritual for a cult that worships something called "The Centre", John and Slam find the cultists and the boy at a church, where Batman is currently fighting the cultists. The two cops join into the fight, but during the fight a fire is started, rendering John powerless until Slam extinguishes it. Batman nearly saves the boy from the cultist leader, who was about to sacrifice him, by breaking his wrists, scaring away the other cultists who are left standing. Afterward, when Batman attempts to free the boy from his bonds, the child is terrified at the sight of him. Slam calms the boy, and John finds a book belonging to the cultists that catches his attention and finds it locked. The incapacitated cult leader warns the detectives that they and the world will be judge by "The Centre".

In Las Vegas, a heavyweight boxing tournament is being held between boxing champion Ted "Wildcat" Grant and the youthful and skillful Cassius Clay. Also in the audience that are watching the matches are Bruce Wayne, Lois Lane, Ted's fiance Selina, Oliver 'Ollie' Queen, Kyle "Ace" Morgan, and Hal Jordan. In the fight, Cassius has an upper hand over the older Grant, but ultimately Ted defeats Cassius with a single 'wild' punch, maintaining his position as boxing champion.

After the match, Hal and Ace retells their time in Korea to two ladies in a lounge of the Utopia casino. High above the VIP room, Oliver Queen said to Lois and Bruce about seeing former Green Lantern Alan Scott was present at Ted's match but ducked out early so as to not ruin Ted's publicity. Lois views her disagreement over vigilantes who are unlike Superman as he stands over America's value. The trio are then joined by Carol Ferris and Richard Flagg who came to see Ted's fight and are later then joined by the said boxer.

Meanwhile in Barry Allen's home in Central City, Barry is on a phone call with his girlfriend Iris West from the Utopia about her interview with Ted Grant and as well receiving an autograph from him. Suddenly Iris' call is disrupted with the explosive appearance of Captain Cold who plans on robbing the people. Noticing Iris on the phone, Cold freeze Iris' hand that was on the phone. Barry, hearing what has happened, dress into his costume as the Flash and runs to Las Vegas.

At the Utopia, Cold and his henchwomen has stole the people's valuables and are about to make their leave via helicopter. However, Flash has arrive, freeing Iris' frozen hand, and is about to punch out Cold. But the villain quickly tells Flash to stop and warns him that he has taken the precaution of setting a series of six cryogenic bombs across the city. And worse they are already set to go off at thirty seconds. Having no choice, Flash leaves Cold to disabling the bombs. Back in the VIP room, Lois and Flagg doesn't speak highly of the Flash, whom they considering him worse than Cold, but Ted Grant isn't, silently wishing that "Jay was here" to see this.

Flash race throughout the city, gathering the bombs and finds that the sixth was a ruse for Captain Cold to make his escape. After tying the bombs to a balloon and releasing it into the sky, Flash race for Cold, climbing up the Utopia's floors and running at Cold's airborne helicopter, disabling it, yanking the villain out, and landing in a fountain. As Cold and Flash recover, Cold's ice gun is malfunctioning from the fountain water and causing it to freeze Cold in solid ice before Flash makes a quick escape. At the same time the balloon carrying Cold's bombs explodes, creating an awing snowy winter over Vegas.

Much later, after being enthrall by the appearance of the Flash, Ace and Hal are driving wildly fast to Nellis Air Force Base. At the base, Ace shows Hal the B-47 Stratojet prototype that he is going to fly on live-television along with three other guests as part of the publicity. Ace then notices Hal has been acting differently, in which Hal confesses things haven't been the same since the war and his time in recuperating from his mental trauma. Also, Hal notes that from every dangerous field tests he was involved in including a TTX dual jet that claimed eight previous lives, he doesn't felt any fear or hesitations which deeply troubles him. Ace suspects that Hal is simply punishing himself in which Hal refuse to admit. Hal then ask Ace if he ever thinks of the men he killed in which Ace replies that he doesn't have any guilt or regret, stating that it is because of circumstances: The men he killed, he believes them as soldiers who are honorable and believed in what they were fighting for that are no different from Ace.

Hearing his words, Hal apologize for his gloomy behavior. Ace then remembers of someone that he wanted Hal to meet at the Utopia all thanks to Cold's robbery, who reveals to be Carol Ferris who also intend of giving Hal a job. Hal immediately recognize Carol Ferris as his father used to work for her father's company, and is overexcited of having the job. When hearing from one of the B-47's technicians that the aircraft is ready, Hal bids Ace with good luck on his flight.

Retrieved from "https://heykidscomics.fandom.com/wiki/DC:_The_New_Frontier_Vol_1_2?oldid=1422256"
Community content is available under CC-BY-SA unless otherwise noted.