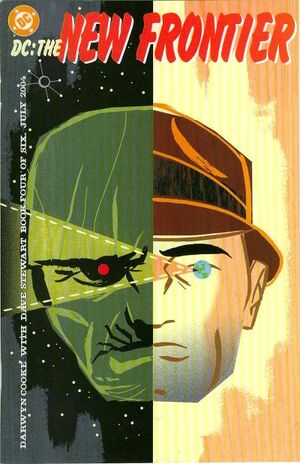 Appearing in "Mystery in Space"Edit

Synopsis for "Mystery in Space"Edit

It is now the year 1958 in Central City. Barry Allen overhears the radio at work about Gorilla Grodd running loose in the city. As the Flash, he finds Gorilla Grodd, but Grodd is revealed to be a robot, releasing a loud vibrational sound that stuns the speedster. Then, government agents, led by King Faraday, appear and trap Flash in a net. After ordering his agents to create a smokescreen in the area, Faraday approaches Flash, stating that he is now the "property" of the American government and shoots a tranquilizer dart at Flash; however, despite the shock of his capture, Flash escapes by phasing through the net before being hit by the dart.

In Coast City, Hal Jordan and Carol Ferris are at an auto show to meet with Ace Morgan and June Robbins, who is introduced by Ace to Hal and Carol as the newest member of the Challengers of the Unknown.

Meanwhile in Gotham City Police Department, John Jones looks at his personal wall of article clippings consisting of UFO sightings and civil rights issues, including the vigilante that has plagued the Ku Klux Klan, John Henry, as called by the press; John sees Henry as a true American hero. John is then needed by his fellow officers in interrogating a crazed man named Harry Lieter for shooting a police officer and "saving" his mother (it is heavily implied that Lieter killed her). During his interrogation, John learns via his mind-reading ability and spoken interview that Lieter was formerly an engineer at Ferris Aircraft in California and that he went crazy and paranoid after learning about Task Force X's information of hidden Martians "taking over the Earth." After several hours, the interrogation is interrupted by King Faraday and his agents who are there to retrieve and arrest Lieter. After the former engineer is taken away, Faraday, Commissioner Gordon, and John talk about signing Lieter's release. Faraday acknowledges John's interest in aliens and UFOs, and speaks further with him before signing the release. After shaking Faraday's hand, John reads Faraday's mind, confirming that his presence on Earth is known by the government and that they are actually building a rocket to Mars.

Meanwhile, at Ferris Aircraft, Hal Jordan and Task Force X are practicing in a space flight simulator. During the simulation involving a meteor field, Rick Flagg argues about Hal's risky actions, to which Hal replies that he has it under control. However, the simulation fails, leaving Flagg frustrated over Hal's "showboating."

As Hal sits outside of Ferris' office, he can hear the arguments between Carol, Flagg and Faraday over Hal's involvement in Operation Flying Cloud. Flagg coerces Carol to reassign Hal from the operation to a simple control operator overseeing the operation's control center, shooting down Hal's chance in space.

In Tennessee, John Henry is wounded in the leg by the Klan as he flees into an alley. Weakened, he falls into a backyard and is discovered by a young white girl. Henry begs her to help him, but she reveals his whereabouts to the Klans.

Three days later, on the television show call The Big Picture that is broadcast across the nation, the show's host reveals that John Henry was killed by the Klan. Despite his death, the host praises Henry's stance against the serious issue of racial violence, and heavily criticizes the American government for its ineptness and hypocrisy of fighting for freedom when it couldn't even guarantee civil basic liberties and safety to its own citizens. Among those watching the show is John Jones, who is shocked and heavily dismayed of John Henry's death.

Meanwhile, in the skies over Paradise Island, Superman meets with Wonder Woman. He asks her why she has retired from her super-heroine duties and why she left the United States. Wonder Woman corrects him that the reason she left was because of the government was forcing her to betray her ideals, and that the nation that they know is not the same when they fought for during World War Two. She finally states to Superman that America needs compassion and spirit, not an administration, before returning to the island and leaving a dispirited Superman.

Back in Gotham, J'onn J'onzz sits in his darkened apartment, perturbed with John Henry's death and bigotry in general, which he also reflects on how his new adopted home would treat him differently if he revealed his identity. He then finds comfort for his problems by watching television. While watching a news report, the Flash suddenly appears. Flash states that after three years of being a hero and saving people, he is treated more as a criminal while mentioning his incident with Faraday. Believing that his country thinks less of him, Flash decides to retire. After watching this, J'onn makes his decision to leave Earth.

That night, appearing as John Jones, he and James Gordon awaits for Batman on the rooftop of GCPD. They are met by the Dark Knight, and John privately talks with him about the Centre situation. He briefs Batman of his findings on the Centre Cult's book and that all his compiled research in his apartment are now Batman's to solve. After Batman left, Gordon expresses his pleasure to John for working with him.

Batman investigates John's findings, then calls someone, saying that person needs to look at the evidence, and meet Batman the next Tuesday.

At Ferris Aircraft, Operation Flying Cloud is in preparation for lift-off. Hal apologizes to Rick Flagg for his previous actions in the simulator and wishes him well on the flight. Flagg accepts the apology and tells Hal that it is wasn't his ride.

The entire base is preparing for the launch and, with the help of Doctor Will Magnus and his team, cloaking Soviet radar from detecting the launch. However, Faraday then notices from his monitors that shows J'onn J'onzz appearing near the base of the rocket.

Beneath Flying Cloud, J'onn plans to board the hull of the ship. However, his plan is dashed, and he is held at gunpoint by Faraday, who believes that J'onn intends on sabotaging the rocket. J'onn quickly subdues Faraday, knocking him unconscious. The countdown for the ship starts, but J'onn realizes that Faraday will be killed by the launch blast, forcing him to save Faraday and abandon his chance to leave for Mars. In the process, he is weakened by the ensuing rocket blast.

Thirty hours later, at Nellis Air Force Base, Faraday visits an imprisoned J'onn. He explains to the Martian that after they were safely away from Flying Cloud's launch, they were founded by the base's Military Police, and that J'onn had passed out for a day. Faraday wants to know why J'onn saved him given that he had the chance to leave Earth. J'onn explains that he couldn't let another living thing die unnecessarily. He also states that, after knocking out Faraday, he looked into the agent's mind finding that Faraday is pure and good, and believes that one day the world won't be living in fear and hate. This filled J'onn with renewed hope for humanity, much to Faraday's astonishment. Faraday is broken from his self-discovery when he is informed that he is needed at Ferris Aircraft.

Faraday soon learns from Carol Ferris that once Flying Cloud reached space, Jess Bright went insane due to his mental problems and tried to sabotage the rocket, after which he was plunged into space to his death. Flagg and Karin Grace are safe within Flying Cloud's forward hatch, but they lack fuel and are on the verge of burning up as they re-enter Earth's atmosphere. Faraday contacts Flagg and wants to know about "the cargo." Flagg states that he couldn't eject it and wants to talk with Hal.

Flagg admits to Hal that during the war he had served with Ace Morgan, Farday and Hal's father, Martin "Martini" Jordan. They bonded together throughout the conflict. Before Martin's death, his friends favored him the most because he was the only one to have a family among them, and since Martin's passing, Hal's involvement in the Korean War drove Flagg and the others to look out for him. Now, it is Flagg's turn to watch, and has to make the decision to use the "cargo" and the survival odds of the people he served with convince him that Hal wasn't likely to have lived through the operation.

Hal then receives contact from Ace Morgan and the Challengers that they know about Flying Cloud's re-entry and are speeding to the rocket in their ship to help. Faraday warns Ace to immediately abort their rescue, but the Challengers ignore him. Frustrated, Faraday decides to call "the big guy".

In Tokyo, Superman is fighting a giant robot when he is contacted by Faraday, who refers to Superman as "Bishop Six."

Faraday then reveals to Hal and Carol that the "cargo" that Flying Cloud carries are weapons of mass destruction, which are to be used in a scenario should the Martians become a serious threat. Given that Flying Cloud's re-entry to Earth would release the weapons and rain destruction over the planet, Flagg knows he has to destroy the ship along with everyone on board. And if the Challengers were to "save" Flying Cloud, everything would be lost.

In space, the Challengers' ship approaches Flying Cloud, jettisoning its twin missiles piloted by Red Ryan and Rocky Davis. The missiles reach Flying Cloud, and Rocky and Red attach tow cables to the rocket's wings in an attempt to adjust the angle of its entry.

On Earth, Superman defeats the robot and contacts Faraday.

Red and Rocky are able to adjust Flying Cloud's entry but are themselves facing death in the entry. In the rocket, Flagg's life flashes before him and, knowing of the weapons effects should they be released into the atmosphere, he and Karin embrace and destroy the rocket. Outside, Superman is able to save Rocky and Red.

Sometime later, Flagg and Karin's funeral is held at Arlington Cemetery and were given a 21 gun salute (which was usually reserved for Memorial Day and dead presidents) as Faraday sadly sits near their graves.

At Ferris Aircraft, Hal, with permission from engineer Tom "Pieface" Kalmaku, has a moment with the Flying Cloud simulator moping over his chance in space. Suddenly a green light stirs around him. Directly after, Carol hears a rocking sound from the simulator room. Upon checking, she finds the simulator and Hal are gone and there is now a large gaping hole in the ceiling.

Retrieved from "https://heykidscomics.fandom.com/wiki/DC:_The_New_Frontier_Vol_1_4?oldid=1422258"
Community content is available under CC-BY-SA unless otherwise noted.