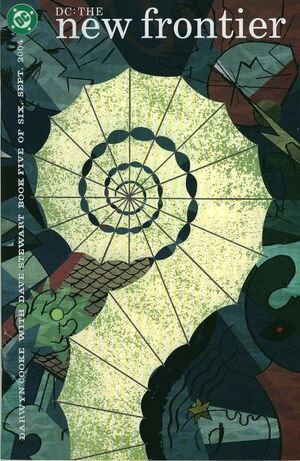 Appearing in "My Greatest Adventure"Edit

Synopsis for "My Greatest Adventure"Edit

At Challenger Mountain, Rocky and June gives Lois Lane and Jimmy Olsen a tour of their base. Ace is on the phone with Hal Jordan questioning him if there is something wrong for calling him. On the other line Hal reply that there isn't and decides to call back some other time as he stare at a Green Lantern Ring in his hand.

After hanging up, Hal is apprehensive of his day of being brought forth by a dying Abin Sur of the Green Lantern Corps and being chosen as his successor. Hal steps out of the phone booth and slides down the highway to Abin Sur's body and build a grave for the fallen Green Lantern.

Moments ago, after Hal was brought to Abin, the Green Lantern recall that he came to Earth on a mission of "great importance" and that upon arriving Earth's atmosphere he was consumed by the yellow light spectrum from an explosion cause by the destruction of Flying Cloud and being mortally wounded in the process. He explains to Hal that he is chosen by the ring as a worthy Lantern for his courage. Though Hal states that he is branded as a coward since the Korean War, but Abin explain that courage takes many forms and that Hal's courage is that of: his conviction for what he believe, to value existence and to act decisively when survival is at stake; so forth that is why the ring chosen Hal in the name for good. Abin instruct Hal of how to use the ring and its Power Battery, expected to be contacted for everything that will be "all revealed", and importantly the weakness of the color yellow.

In the present, Hal wears the ring and is instantly dress in a Green Lantern uniform. Hal then test the ring, causing him to fly. En thrill, Hal flies into outer space, but is stopped by "phantasm" who tells him that he isn't ready.

Hal returns to Earth and examine the crashed simulator that Hal was brought to Abin, and realize the troubles that his superiors will make of this and decides to bury the evidences including Abin Sur's grave. Hal lifts a mountain with his ring and slowly tries to level gently over the simulator and Abin Sur's grave. However, after being surprised by a rattle snake the mountain falls, heavily littering the area with its debris as Hal shields himself in safety.

Back at Challenger Mountain, June introduce Lois and Jimmy to Professor Haley who is examining tissue samples of the dinosaurs that have been appearing around the Pacific and Atlantic coastlines. Their moment is cut short as Rocky alerts of a dinosaur attack off of Florida's Cape Canaveral. The Prof and June gets ready to travel to Cape Canaveral along with Jimmy and Lois.

Chapter Eleven: Towards the Centre

At the Daily Planet, Clark Kent examines a strip of footage that was sent to him, containing a story by story of a children book "the King of Monster Island" written by author Theodore Smiesel, who after completing the story committed suicide...

The story is told by a unknown entity that has been "born" on Earth since the planet's creation. But has taken a "unique path" that developed "attributes beyond those of lesser beings". The entity have lived peacefully for millennia until a asteroid wiped out prehistoric life. It then quickly rescued the planet's lifeforms and placed them on a flourish island at the "centre of a great ocean I would ensure that life would survive."

Until after the Ice Age, the entity observed humankind taking shape and its development for violence. After centuries humans have harnessed the "most destructive force" and the entity, in fear, decide to leave Earth after cleansing the "vermin" for the "greater good"...

Superman travels to Gotham City and meets with Batman and his new protege Robin. Batman have altered the design of his suit so it won't frighten an innocent, but is still able to strike terror in the heart of a guilty. Batman is revealed to be the one who sent the microfilm to Superman concerning about the Centre. Superman reviews with Batman of Smiesel's story to be absolutely disturbing and ominous for a children book. Batman concur that the book contains nothing of Smiesel's oeuvre as if something else was speaking through him. Since the findings to be obviously monumental and imminent, and has ties to the Centre, Batman decides to pass the burden to Superman to find out what the Centre is. Before the two depart, it is revealed that their last "battle" against each other years ago was staged which allowed Batman to be free from any Federal interference to protect Gotham.

At Paradise Island, Wonder Woman trains a Amazon in sword fighting. Suddenly their training is interrupted by a large object that overshadows them.

At Nellis Air Force Base, King Faraday and J'onn plays a friendly game of chess and gets to know each other. Faraday tells his story of how he is named "King" because his father gave him that name as a play on words for "king for a day." The two then talk about the potential looming threat as if an immense dread is being felt across America combined with J'onn's and Professor Haley's findings on the Centre, and suspects that it is all connected to an unknown powerful entity that J'onn already knows. J'onn then ask Faraday if he and his government are prepare to face against this threat.

Meanwhile, the Challengers, Lois and Jimmy arrives at Cape Canaveral and witness a dinosaur, a giant mutant pterodactyl, on some oil derricks. They are radio contacted by Captain Nathaniel Adam who assures them that "Bishop Six" is coming. When the Challengers are puzzle as to who is Bishop Six, they then see Superman arriving on the scene and subdue the creature, and tying it onto a beach with steel cables.

In the Atlantic Ocean, a Atlantean king has been observing and following the creature, the Centre, for a length of time with the army of undersea life at his back. The entity has been traveling around the Americas from the Pacific, and knows that it seeks to cleanse the surface...

Cape Canaveral is put on full military alert as Ace learns from Captain Adam that something big has appeared 700 miles offshore.

Superman, Rocky and Prof examines the pterodactyl and hears a buzzing noise that was heard earlier and is coming from the creature. They then hear another buzzing and see that it is Wonder Woman's invisible plane and all can see her cockpit smear with blood. The plane makes a crash landing and Superman hurries to Wonder Woman and for medical help.

Meanwhile, Red Ryan flies over the Pacific Ocean and reports to Professor Haley that there isn't a trace of Dinosaur Island. Back at Canaveral, the Prof is dumbfounded as the island is solely the logical source for the dinosaurs. Captain Adam then see's the news on television showing Lois Lane taking a live media coverage from a helicopter that she shanghaied and showing what is attacking off of Florida: The Centre, a massive flying 'island' that is carrying an army of countless prehistoric creatures, which is effortlessly repelling and destroying Canaveral's airborne and naval forces.

Chapter Thirteen: Danger is Our Business

Following an hour of Lois Lane's report of the Centre, authorities are evacuating Florida's population and Washington is speculated of planning a nuclear response to the Centre. Barry Allen watches anxiously before wanting to talk to Iris. His girlfriend then reveals to him that she already knows that he is the Flash and that she is proud of him. She then talks Barry into coming out of his retirement.

At Nellis Air Force Base, J'onn feels overwhelm from the immense mental power that is being transmitted from the Centre. Faraday arrives at J'onn's cell, asking him if he can come along to see the situation at Canaveral. He agrees and also adopts a new Martian/human-like hybrid form in order to have a more friendlier appearance; however, he changes his costume to a government agent suit at on Faraday's behest.

From around the world, heroes, including the Blackhawks and the Sea Devils, have been alerted about the Centre and have come over to Cape Canaveral for "America's greatest battle".

In California, after shaken with his "mountain incident", Hal Jordan has taken into hiding at a motel and waits for Abin Sur's contact as he watches TV and eventually learning the report about the Centre. He then conclude that Abin Sur's reason for coming to Earth was the Centre and decide to take action. At Ferris Aircraft, Hal have Pieface take out the company's prototype flying saucer. Carol Ferris finds them and angrily demands Hal as to what happen to him and the simulator, as well about what he is doing right now, until she then realize that he is intend to fight the Centre. Hal retorts to Carol what is viewing and that his action in Korea was out of the sense to survive and that is what he is going to do against the Centre. Carol apologizes to Hal and that she doesn't believe him to be a coward. Before Hal leaves he kisses a smitten Carol.

Wonder Woman, who is confined in infirmary, tells Superman of what happen to her on Paradise Island: the Centre hovered above the island and sending its saurian creatures to attack the Amazons. Though Wonder Woman and the Amazons fought the mutant creatures with fury, but their numbers was countless. The Centre shortly left the island as it has its intention on Florida and leaving the southern part of Paradise Island in devastation. Before losing conscious, Wonder Woman urge Superman that the only way to defeat the Centre is to lead and unite the people who came to fight the creature.

Superman then hears a commotion outside among the gathering heroes and military personnel between Green Arrow and Captain Nathaniel Adam over their political differences. The conflict is quickly stopped by Superman, who reprimand them for bickering over "a mask or uniform" when they are all present to face a present threat and strongly advocates cooperation between them. He is unexpectedly seconded by Faraday, who has arrive and accompanied by J'onn, who agrees and reinforce with Wonder Woman's statement of unity. Superman then decide to recon the Centre and tries to see if he can try to communicate with it, but he understand that its foreboding intentions and yet with the heroes and everyone together they can defeat it.

As Superman flies to the Centre, he is attack by the creature's monsters. However, the attack was a distraction and allowing the Centre to send a massive blast of energy at Superman, whose flaming body is thrown into the depths of the sea as everyone on land watches in horror.

Retrieved from "https://heykidscomics.fandom.com/wiki/DC:_The_New_Frontier_Vol_1_5?oldid=1552412"
Community content is available under CC-BY-SA unless otherwise noted.