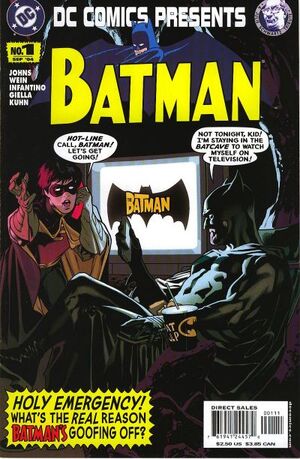 If I've got even half a chance of beating you, I intend to take it!

Appearing in "Batman of Two Worlds"Edit

Synopsis for "Batman of Two Worlds"Edit

Batman and Robin investigate when the actor who plays Batman on a popular television program is accused of having murdered the actor who plays Robin. It turns out to have just been Clayface impersonating both, who had grown tired of his life of crime, and turned to a life of theater, where he could act out multiple roles. The strain of continuing the lives of both actors had been too much for him. Granted, as soon as he is discovered, Clayface tries to kill both of them. After he disintegrates, it turns out that the real Clayface was the Robin in the morgue, who escapes, and goes on to audition for a production of Phantom of the Opera.

Appearing in "The Ratings War!"Edit

Synopsis for "The Ratings War!"Edit

A corrupt television executive Nielson Minnow begins a show based on the real-life exploits of Batman and Robin, filming all of his encounters with criminals. Batman worries that having the public made comfortable with him will reduce his effectiveness, and seeks a way to stop the television program. He realizes the only way the cameramen could follow him to every crime scene would be if the executive had prior knowledge of the crimes, and trails Two-Face back to the television studio. After receiving a taped confession and stopping Two-Face from killing Minnow, Batman is annoyed to see Minnow continuing to film him. Batman tells him he's been canceled and punches his lights out.

Retrieved from "https://heykidscomics.fandom.com/wiki/DC_Comics_Presents:_Batman_Vol_2_1?oldid=1533645"
Community content is available under CC-BY-SA unless otherwise noted.