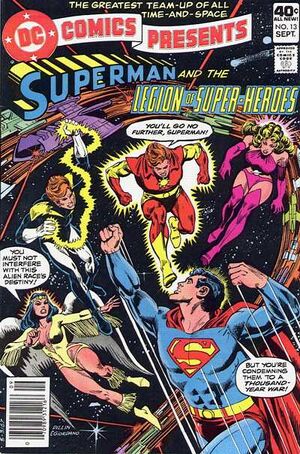 Appearing in "To Live In Peace--Nevermore!"Edit

Synopsis for "To Live In Peace--Nevermore!"Edit

When a strange alien craft endangers a space capsule in space, Superman goes to the rescue. Seeing the Earth astronauts safe, the Man of Steel follows the alien craft back to it's galaxy where it finds that the Nrvynian race is starting a huge intergalactic war. Seeing them as a threat to peace in the universe, Superman would get involved, using his super-powers to disarm them and stop their conflict. He would then be stopped by the Legion of Super-Heroes, who have traveled back in time from the year 2979. They explain to Superman that the coming Nrvynian intergalactic war is a key part of their future. That their war would carry on for centuries, however this war would cause the human race to advance their own technology and fight back -- winning the war which would lead to the era of peace that the Legion exists in. Finding the reality hard to swallow, Superman agrees to not change the future and leaves the scene allowing the Legion of Super-Heroes to free up the Nrvynian fighters and send them back on their fated course.

Superman returns to Metropolis where he changes back into Clark Kent, and runs into Steve Lombard. Lombard tells Clark that there is someone waiting for him. Clark is surprised to find that it is his old friend from Smallville, Pete Ross. Pete tells Clark that aliens have captured his son Jon and reveals to Clark that he has secretly known he was Superman for years. When Pete shows Clark a drawing of the alien ship that captured Jon, he is shocked to see that it was the same ship that it was the same Nrvynian ship that he saw in Earth space earlier that day. Clark quickly changes into Superman and races off to save Jon, promising Pete that he won't come back until he returns his boy safe and sound.

Meanwhile, the Legion of Super-Heroes, knowing of Jon's abduction fly down to the surface of Nrvynian and find the boy locked up in a prison cell. They explain to Jon that he is fated to be trained by the Nrvynians to be a soldier and years into the future he would play a pivotal role liberating the universe and ushering in an era of peace. When they learn that Superman has revealed his identity to the boy, they realize that the Man of Steel might come to rescue him. Sure enough, when they go back out into space they arrive as Superman is coming to liberate Jon. The Legion tries to explain things to Superman, but the Man of Steel refuses to allow Jon to live out the rest of his childhood in captivity. However, it seems that fate has stepped in and no mater how much Superman tries to get to Jon he is stopped.

After being blasted by an alien ship, he is taken aboard the Legion's time bubble where they try and come up with a solution to prevent the Millennium War. When Superman gets the Legion to realize that no other planets in history have records of being attacked by th Nrvynian race, they realize that it could have been a millennium long war game instead. Inspired by this, Superman and the Legion of Super-Heroes quickly go to Earth and collect Superman's now defunct Superman robots and set them up in massive space ships to battle the Nrvynians for the next thousand years in order to preserve history without any loss of life. Satisfied with this, the Legion and Superman part company, and Superman returns to Metropolis with the hard task of explaining things to Pete Ross.

When Superman attempts to explain things to Ross, his old friend cannot bring himself to accept the truth of the situation and vows that he will make Superman pay for failing to return his boy home to him.

Retrieved from "https://heykidscomics.fandom.com/wiki/DC_Comics_Presents_Vol_1_13?oldid=1421921"
Community content is available under CC-BY-SA unless otherwise noted.