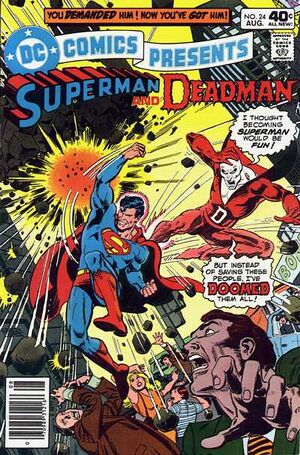 Can't let this huge cornice fall on the folks below... and while I'm wearing this body, I don't have to! This, as the snappy saying goes, is a job for... Superman!

Appearing in "The Man Who Was The World!"Edit

Synopsis for "The Man Who Was The World!"Edit

Deadman has had enough and calls upon Rama Kushna. He demands her to let him take his eternal rest. When she asks why, he explains his most recent incident in possessing someone. He tells her about Abraham Gold, an old man who was dying of cancer.[1] Because he could not steer his son away from dealing drugs for a crime boss named Caprice, Gold was about to commit suicide until Deadman intervened. Possessing Gold's body, he attempted to take the drug dealer in, but Caprice shot Gold dead. Rama Kushna's response to Deadman is that Gold made a sacrifice to stop Caprice, which lead to his son giving up his life of crime. However, Deadman cannot live with the idea that he sent the old man to his death. Rama Kushna decides that she will grant him his eternal rest under one condition. When Deadman asks what it is, he finds himself teleported to Metropolis and told to see what it is for himself.

Deadman materializes in the middle of an earthquake and uses his powers to save an old man from being crushed by falling debris. Still unconvinced of his usefulness, Deadman spots Superman flying over the city preventing damage and decides to follow the Man of Steel. He witnesses Superman rescuing a man who has suddenly keeled over from a heart attack. When Superman scoops up the man, and is about to bring him to a hospital, the man instead asks to be taken to S.T.A.R. Labs. There, Deadman listens in as the man introduces himself as Alex Atley, to Superman and Janet Klyburn, and shows them that he has a special pacemaker device that is responsible for the earthquakes. Before explanations can be made, his daughter and her boyfriend burst into the room. Superman loses his patience and asks them to explain the whole story from the beginning.

Alex explains that he headed a government project called "Operation: Earth-Heart," that used a laser to bore a hole to the Earth's molten core -- it's heart. During the project, Alex began suffering heart attacks and soon built a pacemaker device that linked him to the Earth's core. He hoped that it would keep him alive indefinitely, but instead, it has linked him to the Earth in such a way that whenever he has a heart attack, it/he triggers earthquakes.

While Dr. Klyburn is trying to find a way to stabilize the pacemaker, Deadman becomes suspicious of the boyfriend and decides to follow him. His uneasy feeling proves to be correct as he has been providing information for an elderly mobster named Mr. Genarian. Genarian is seeking to utilize the technology to prolong his own life. With his life running short, he and his thugs demand that the boyfriend take them to S.T.A.R. Labs in order to steal the technology. Following them to S.T.A.R. Labs, Deadman suddenly decides that he needs to do something. Rama Kushna appears and reminds Deadman of his earlier demands, but Deadman decides to help.

He rushes off to the Daily Planet where Superman is recounting his tale to Lois Lane. He takes possession of the Man of Steel's body and flies toward S.T.A.R. Labs. When another earthquake hits, Deadman attempts to use Superman's body to deal with the collateral damage, but his lack of training with Superman's powers makes him realize that he should leave the actual Man of Steel to deal with it and releases his hold. Superman, feeling some strange force directing him, heads for S.T.A.R. Labs. There, he confronts the mobsters, but they lose their interest in fighting when their boss dies during the battle due to old age.

Realizing a giant earthquake is about to hit Metropolis, Alex demands that they let him die. Superman immediately burrows deep into the Earth to locate the device that links Alex with the planet. Meanwhile, Deadman possesses Alex's body in order to keep him alive. He manages to fight off death within Alex, and with it's grim specter defeated, death relinquishes possession of the man's body just as Superman arrives with the control device. With Alex's directions, Superman deactivate it, and also corrects Alex's heart problem with super surgery. With the crisis averted, Deadman watches over the situation. Rama Kushna appears and offer to take Boston to his eternal rest, however, Deadman refuses, telling her that his work on Earth is not done yet.

Retrieved from "https://heykidscomics.fandom.com/wiki/DC_Comics_Presents_Vol_1_24?oldid=1421932"
Community content is available under CC-BY-SA unless otherwise noted.