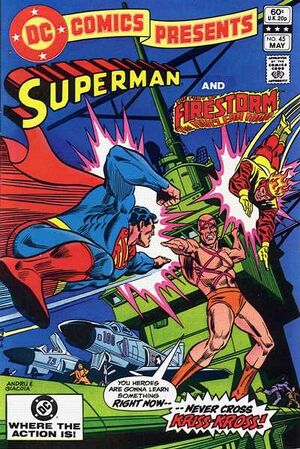 Appearing in "The Chaos Network"Edit

Synopsis for "The Chaos Network"Edit

Superman and Firestorm are opposed by Kriss-Kross, a terrorist whose body fused with the high-tech equipment he was stealing to give him super-powers.

Retrieved from "https://heykidscomics.fandom.com/wiki/DC_Comics_Presents_Vol_1_45?oldid=1421953"
Community content is available under CC-BY-SA unless otherwise noted.