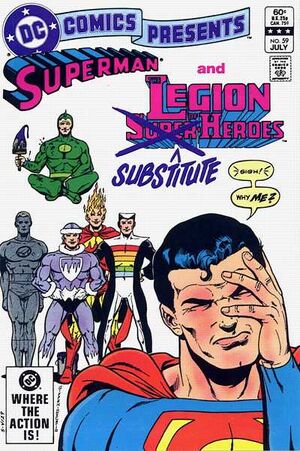 Call me incorrigible... but call me, please!

Having escaped from prison, Ambush Bug has decided to try and hitch a ride on Superman by teleporting on the Man of Steel's back. The Bug picks a particularly bad time to do so as Superman was about to go on a mission into the 40th Century. Realizing that Ambush Bug has hopped on his back, Superman stops travelling through the time barrier as quickly as possible, ending up in the 30th Century, the home era of the Legion of Super-Heroes. Needing to get his mission done, and not wanting to deal with Ambush Bug until later, Superman tries to drop him off with the Legion of Super-Heroes, but finds that the Legion is away on a mission. With no other choice, Superman leaves Ambush Bug with the Legion of Substitute Heroes, in spite of his doubts that they can keep Ambush Bug contained he has no choice to trust the bumbling Legion of Substitutes who assure the Man of Steel that they have the situation under control.

However, they do not, because they did not have an adequate holding facility to keep Ambush Bug at bay, and the trickster manages to break out of his cell (Which was really just a fish tank, and the Substitutes were too ashamed to tell Superman that their holding cells were broken.)
When Superman returns to the 30th Century he's mortified to find that Ambush Bug is running amok in the future and that three of the Legion of Substitutes are trying to stop him: Fire Lad, Chlorophyll Kid and Stone Boy. This doesn't end well when Stone Boy tries to soften an impact by turning into stone form and getting his head stuck in the ground, Superman leaves Fire Lad and Chlorophyll Kid behind to try and find a way to get Stone Boy out of his jam while he goes after Ambush Bug. Figuring he finally managed to capture the Bug in his cape, the Bug teleports away with Superman's trademark cape. Superman is then approached by the Science Police who ask him to come to their headquarters to assist in stopping Ambush Bug.

The Bug himself has found amusement by finding a strange alien, tying Superman's cape around the creatures neck and dubbing it "Superman II" and tossing it off a building to see if it can fly. The confused alien is saved by Color Kid and Antennae Lad. They are then menaced by Ambush Bug who reclaims Superman's cape and disappears, deciding to wear it himself and begins to enjoy life in the 30th Century. He then decides to get Superman's attention by running amok in the Superman Museum. Superman meanwhile is meeting with Science Police Chief Zendak with Substitute Legion members Porcupine Pete and Infectious Lass. When they learn that Ambush Bug is in the Superman Museum, Superman is mortified that the Bug may stumble upon his secret identity, Porcupine Pete assures Superman that they can capture the bug with the help of auxiliary Substitute Legion members, an assertion that Superman has a feeling of dread over.

Trying to capture Ambush Bug inside the Superman Museum proves to be more difficult as the annoying pest manages to evade capture from then the most capable member of the Substitute Legion. Superman finally finds a way to defeat the Bug however: Using the pests natural defiance toward authority against him, they trick him into activating the Phantom Zone projector by putting "do not enter" and a "do not push button" on the Projector. As expected, Ambush Bug disobeys these warnings and pushed the button on the Phantom Zone Projector and is transported to the Phantom Zone.

With Ambush Bug contained for now, Superman will go for the annoyance and recover his cape once he has an adequate holding cell for him. Later as Superman and the Legion of Substitute Super-Heroes celebrate their victory, they wonder where Fire Lad, Chlorophyll Kid and Stone Lad are. They are in fact, still where Superman left them, with Fire Lad and the Chlorophyll Kid trying to figure out how to get Stone Boy's head out of the ground.