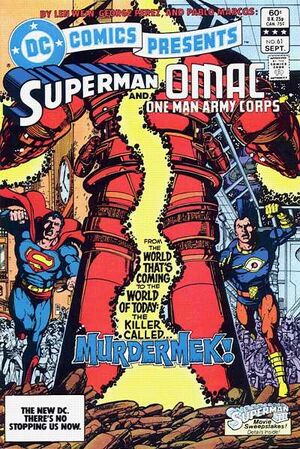 I am like nothing you've ever seen! I am the sum total of humanity's greatest hopes and aspirations... the living embodiment of its dreams for a better tomorrow...

Appearing in "The Once-and-Future War!"Edit

Synopsis for "The Once-and-Future War!"Edit

OMAC bursts into an Intercorp laboratory and begins fighting the criminal scientists. A group of them manage to activate a time-transmitter sending a robotic assassin known as Murdermek backwards in time. OMAC leaps through the quantum aperture just as the scientists set the self-destruct sequence on the transmitter, stranding OMAC back in the past.

In 20th century Metropolis, a squad of police officers engage in a fire-fight with a group of criminals holding up a liquor store. The Murdermek robot appears in the middle of the fight and begins looking for his intended target. The thugs shot at the giant robot, but to no avail. Superman suddenly arrives and begins fighting Murdermek. Murdermek blasts Superman through a brownstone with his missile launchers.

Suddenly, OMAC arrives in this time period and begins surveying the area for signs of Murdermek. When police officers see him, they assume that he is in league with Murdermek and try to arrest him. OMAC uses his enhanced strength to hurl the cops away from him. Superman witnesses this incident and makes the same assumption that the officers did. The two briefly fight one another until OMAC explains why he has come backwards in time.

Murdermek meanwhile, leaves the scene and continues on his mission. He goes to Metro Central Station where he attempts to assassinate a civilian named Norman Blank. Norman Blank is the ancestor of OMAC and by murdering him, he will succeed in preventing OMAC from ever being born. Superman smashes through the building and scoops up the perceived target. Murdermek's missiles strike the floor as Superman flies him off to safety. He quickly returns to the station to finish his fight with the robot. OMAC however, discovers that Murdermek has provided the thugs from the liquor store with high-tech armored hover-ships. OMAC incapacitates the flyers while Superman finally succeeds in destroying Murdermek. They then address Murdermek's intended target who reveals that he is not Norman Blank, but rather Arnold Berkowitz. The real Norman Blank is a janitor who works at the station who happened to have been standing behind Berkowitz when Murdermek launched his missiles. Superman simply rescued the wrong man.

Meanwhile in the future, Brother Eye uses its hardware to pinpoint OMAC's location in the timestream and finds a way to bring him back to his own era.

Retrieved from "https://heykidscomics.fandom.com/wiki/DC_Comics_Presents_Vol_1_61?oldid=1421969"
Community content is available under CC-BY-SA unless otherwise noted.