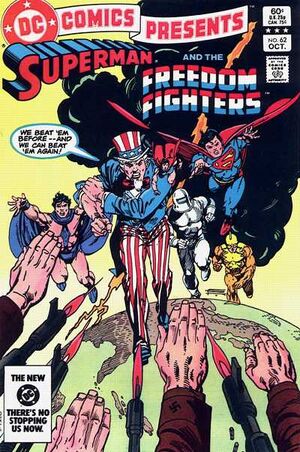 Appearing in "Born On The Fourth Of July"Edit

Synopsis for "Born On The Fourth Of July"Edit

There is a text piece on the letters page of this issue which reveals how the story left unresolved when the Freedom Fighters own series was canceled actually ended, with the Freedom Fighters returning to Earth-X, Phantom Lady retiring and Firebrand and the Silver Ghost apparently dying. This story was published in Cancelled Comic Cavalcade #2, which very few people saw.

Retrieved from "https://heykidscomics.fandom.com/wiki/DC_Comics_Presents_Vol_1_62?oldid=1637137"
Community content is available under CC-BY-SA unless otherwise noted.