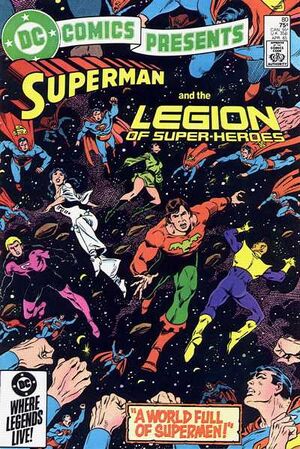 I doubt we're even in the right dimension, let alone anywhere near Earth in the correct time!

Appearing in "A World Full of Supermen!"Edit

Synopsis for "A World Full of Supermen!"Edit

The Legion of Super-Heroes step through a Stargate and end up in the 20th Century, in which Brainiac has captured the city of Metropolis and intends to use the Legionnaires as bait for a trap for Superman.

Retrieved from "https://heykidscomics.fandom.com/wiki/DC_Comics_Presents_Vol_1_80?oldid=1421988"
Community content is available under CC-BY-SA unless otherwise noted.