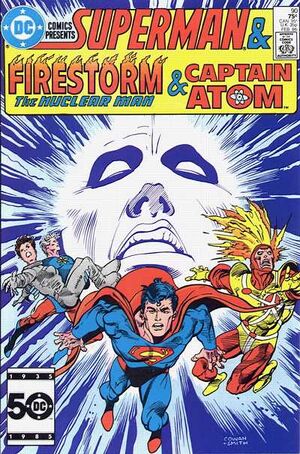 Appearing in "Escape From Solitude!"Edit

Synopsis for "Escape From Solitude!"Edit

This story is likely not canon. This issue was released concurrent to Crisis on Infinite Earths Vol 1 11 in which the consolidated Earth was first introduced and this story appears to take place within that Earth with Captain Atom having existed (in secret) but being familiar with the other heroes. Further, Captain Atom would be reinvented and reintroduced via his own series 13 months from now. Captain Atom's appearance, recapped history and various plot points within this issue are contradicted by information presented in the latter series.

Retrieved from "https://heykidscomics.fandom.com/wiki/DC_Comics_Presents_Vol_1_90?oldid=1663051"
Community content is available under CC-BY-SA unless otherwise noted.