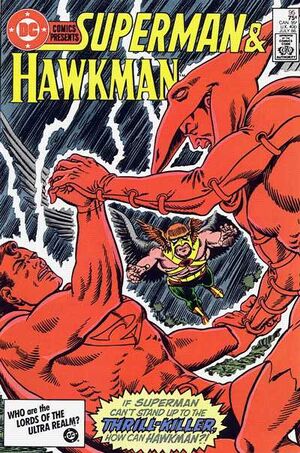 Appearing in "The Big Kill!"Edit

Synopsis for "The Big Kill!"Edit

Kasta, a Thrill-Killer from Thanagar, saps power from a black hole and comes to Earth to attempt to murder Superman, from which fate Hawkman hopes to save him.

Despite being published post-Crisis, this issue features the pre-Crisis versions of Superman and Hawkman, who would both be majorly revamped within a few months of this comic's publication.

Retrieved from "https://heykidscomics.fandom.com/wiki/DC_Comics_Presents_Vol_1_95?oldid=1422003"
Community content is available under CC-BY-SA unless otherwise noted.