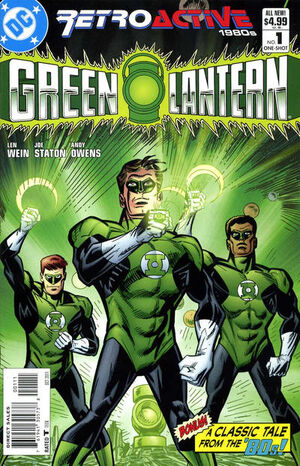 And I figure, if we're going to be a couple, there ought not to be any secrets between us. So, permit me to introduce myself... My name is John Stewart. I'm an architect by trade-- and a defender of the universe by appointment. It's a pleasure to meet you.

Appearing in "The Big Betrayal!"Edit

Synopsis for "The Big Betrayal!"Edit

Retrieved from "https://heykidscomics.fandom.com/wiki/DC_Retroactive:_Green_Lantern_-_The_%2780s_Vol_1_1?oldid=1422026"
Community content is available under CC-BY-SA unless otherwise noted.