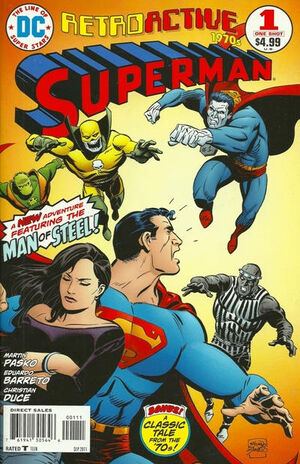 Appearing in "Death Means Never Having to Say You're Sorry"Edit

Synopsis for "Death Means Never Having to Say You're Sorry"Edit

Inside the Fortress of Solitude, Superman makes a routine call to Van-Zee in the bottle city of Kandor. Superman apologizes for interrupting Van's meditation and this leads to a heated discussion. Superman complains that it has been a busy week for him. First, he had to battle Bizarro and then there was a break-out at the Mount Olympus maximum security prison. Superman was able to capture all of the escapees with the exception of the mastermind behind it, the Master Jailer. Hearing this, Van-Zee informs his friend that even Superman needs sleep. He suggests that Superman send Supergirl to the Crystal Hill Game Preserve dedication in his place, then he could get some much needed rest. Superman snaps at Van-Zee's suggestion, thus ending the conversation. Later, Van-Zee and Supergirl discuss how they have never seen Superman so cranky.

On his way back to Metropolis, Superman thinks about how he has been kind of a jerk to his friends lately. He returns to the WGBS building just in time to see Master Jailer going after Lana Lang, and he takes the villain out with relative ease.

Afterwards, Lana throws herself at Superman, but once again Superman has to let her down easy. This causes Lois Lane to become jealous and she wants to argue about it. The Man of Steel continues at the task at hand, repairing the damage caused by the Master Jailer, and ends the argument by flying off. Morgan Edge comes into the room and wonders where Clark Kent and Steve Lombard are.

Meanwhile, SKULL is attacking the Superman Museum. Superman arrives in record time and squares off against the Atomic Skull. While the Atomic Skull attacks, Superman begins to feel the effects of the villain's powers, but they seem to pass right through the other agents of SKULL.

Superman heads back to the WGBS building where, via his X-ray vision and super hearing, he sees Lois defending Lana as they are leaving the building together. Superman is glad the two are now getting along, and he heads inside to change back into Clark Kent to appear on the nightly news.

Meanwhile, we find out that Mr. Mxyzptlk has been causing all of the weirdness going on with the Man of Steel. Apparently, he's in deep trouble with Grbnsqz the Wagerer, as he is in the midst of a double or nothing bet. If he loses, he has to work for the Wagerer for the rest of his life. Mxyzptlk says he can prove that Superman can be just as emotional as anyone, and eventually his being hyper-emotional will eventually "destroy" him and everyone around him. Grbnsqz interprets the word "destroy" literally, and now to win the bet, Superman has to kill himself, which isn't what Mxyzptlk had wanted at all.

Back at WGBS, Clark asks about the footage from the SKULL agent's attack on the Superman Museum, but learns that it never happened, which leaves him baffled. However, when Superman meets with Supergirl at the Fortress of Solitude, she shows him the footage of the same battle and it reveals Mxyzptlk's presence.

Suddenly, Metallo crashes through the wall and takes down both Superman and Supergirl. They wake up later and once again Superman is the only one left with the memory of the attack. He heads back to Metropolis and after a supposed battle with Bizarro, he figures out that the attacks always come after he has become angry. Finally, with a little help from Lois, he is able to overcome the effects of Mxyzptlk's "spell" and Mxyzptlk is dragged off by Grbnsqz.

Afterwards, Superman decides to let Supergirl stand in his place at the Crystal Hill Game Preserve dedication as he and Lois take the weekend off at the Fortress of Solitude.

Appearing in "Superman Takes a Wife!"Edit

Synopsis for "Superman Takes a Wife!"Edit

This story is reprinted from Action Comics #484.

Retrieved from "https://heykidscomics.fandom.com/wiki/DC_Retroactive:_Superman-The_%2770s_Vol_1_1?oldid=1516312"
Community content is available under CC-BY-SA unless otherwise noted.