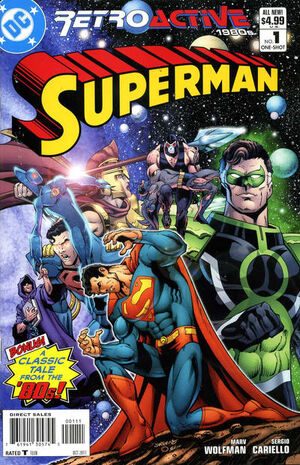 After saving a cruise ship from a bizarre whirlpool, Superman settles in for a good night's sleep. "Destiny" interrupts this by declaring that it is time and Superman's fate must be decided today. At first the Man of Steel tries to go back to sleep, but Destiny isn't having any of that. Destiny informs Superman that he must decide between two evils; one that leads to destruction and the other that leads to despair. Superman is suddenly in Metropolis where he is faced with a giant named The Dread who is busy laying the city to waste. The Dread blames the destruction on Superman, as the Man of Steel has thwarted his other attempts to destroy the world. When Superman fights back, the Dread gives him a choice; serve as his solider allowing the people of Earth to live albeit as mindless, obedient slaves or, fight and the world dies. Destiny freezes time and shows Superman images of what the world would be like if he fought back including; Batman being broken, Hal Jordan going insane and Superman dying at the hands of a rampaging monster. Destiny even reveals that Supergirl would die as well.

Superman refuses to believe those are the only two options and swears that he will fight for the people of Earth as long as he can. He also figures out that the Destiny he has been speaking with is not the Destiny he encountered before.

Destiny believes that they have made the right choice and returns Superman to his apartment. Superman thinks that it was all just a dream. "Destiny", actually Harbinger in disguise, returns to the Monitor's satellite and they discuss Superman's actions and how the Dread may or may not exist someday. Meanwhile Superman calls his cousin to tell her about his dream and that she should be careful. Kara is confident that there isn't much that can hurt her and notes that there probably won't be any rampages today because a bad storm is moving in complete with red skies.

Appearing in "Day Of Destiny!"Edit

Synopsis for "Day Of Destiny!"Edit

This story is reprinted from Superman #352.

Retrieved from "https://heykidscomics.fandom.com/wiki/DC_Retroactive:_Superman-The_%2780s_Vol_1_1?oldid=1422031"
Community content is available under CC-BY-SA unless otherwise noted.