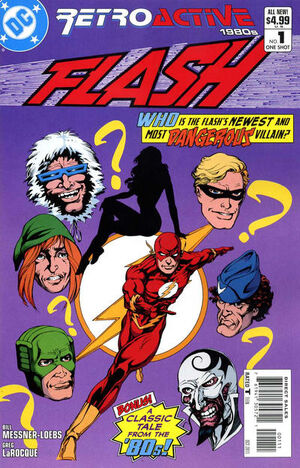 There's something you don't see everyday... Dr. Alchemy running down the road in his underwear.

Appearing in "The Path of True Love"Edit

Synopsis for "The Path of True Love"Edit

Alexis Cooper is obssessed with the Flash. She doesn't understand why her boyfriend (Wally West, the Flash), has been ignoring her. She begins taken weapons from the Rogues to try to get Flash's attention.

Appearing in "The Adventures of Speed McGee - Part 3"Edit

Synopsis for "The Adventures of Speed McGee - Part 3"Edit

Retrieved from "https://heykidscomics.fandom.com/wiki/DC_Retroactive:_The_Flash_%E2%80%93_The_%2780s_Vol_1_1?oldid=1422034"
Community content is available under CC-BY-SA unless otherwise noted.