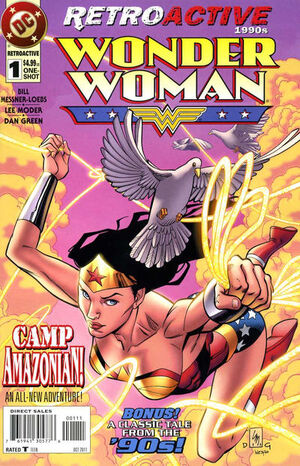 Ha! I, Ken, am home from masculine world of work. Wife, feed me while I ogle your bulbous femininity. Display for me subservience, for I am the man!

Wonder Woman watches The Wonder Blossoms for Etta Candy and teaches them what she did as a young lady.

Appearing in "A Sudden Deadly Leap"Edit

Synopsis for "A Sudden Deadly Leap"Edit

Wonder Woman is sent to space to rescue a stranded Russian cosmonaut, but the two are sent even further into space by the White Magician.

Retrieved from "https://heykidscomics.fandom.com/wiki/DC_Retroactive:_Wonder_Woman_–_The_%2790s_Vol_1_1?oldid=1499116"
Community content is available under CC-BY-SA unless otherwise noted.