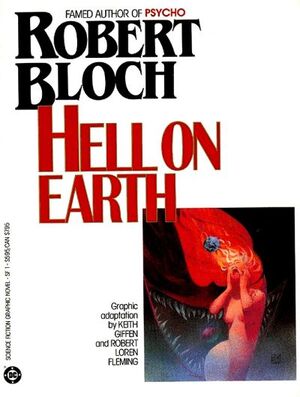 Appearing in "Hell On Earth"Edit

Synopsis for "Hell On Earth"Edit

Two science researchers hire a successful horror writer to act as witness in their attempt to summon the Devil. They succeed and trap the creature in a glass cage. The Devil first takes over the body of the older male researcher, but the writer is able to free him by splashing holy water water upon him. Next, the Devil possesses the female researcher, but the writer is able to free her with a cross and exorcism rites. The writer tells the two that he will attempt to banish the evil creature on his own and they leave him until he phones them to join him. When they arrive they are surprised to find that the writer has apparently fallen under the evil influence as well as he has summoned up various demonic entities and and speaks of conquering the world. The Devil balks when the writer speaks of him as though he were the writer's own literary creation and the story ends when the writer fires a silver bullet through the glass cage into the creature's brain and all the demonic entities within the room are sucked back through the hole into Hell.

Retrieved from "https://heykidscomics.fandom.com/wiki/DC_Science_Fiction_Graphic_Novel_Vol_1_1?oldid=1422040"
Community content is available under CC-BY-SA unless otherwise noted.