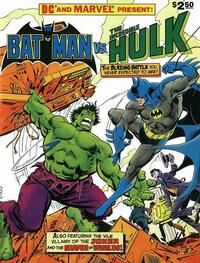 Perhaps a spot of tea will calm your nerves, Dr. Banner.

Appearing in "Batman vs the Incredible Hulk"Edit

Synopsis for "Batman vs the Incredible Hulk"Edit

Bruce Banner is working at a division of WayneTech, assisting in the development of a gamma-gun, designed to cure diseases. Banner hopes it may provide a cure for him - from periodically turning into the Hulk.

The Joker appears and Batman soon follows. After a fight, the Joker escapes with the gun, and the Hulk reverts to Banner. Wayne offers him a proper job, supervising the gun's replacement.

The Joker uses the gun on the Shaper-of-Worlds. The Shaper is losing his ability to absorb the dreams of others, denying himself an outlet for his powers, and potentially driving him insane.

As Banner works on a Wayne research ship in international waters, an army team appears demanding he accompany them. It turns out they aren't the army, and Banner is not pleased, transforming into the Hulk. As the fake General wishes there was a bigger monster to defeat the Hulk, a monster indeed appears - courtesy of the Shaper.