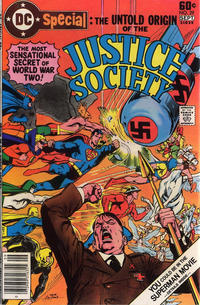 Appearing in "The Untold Origin of the Justice Society"Edit

Synopsis for "The Untold Origin of the Justice Society"Edit

Hawkman is mistakenly depicted wearing the wrong mask in this story.

Retrieved from "https://heykidscomics.fandom.com/wiki/DC_Special_Vol_1_29?oldid=1634107"
Community content is available under CC-BY-SA unless otherwise noted.