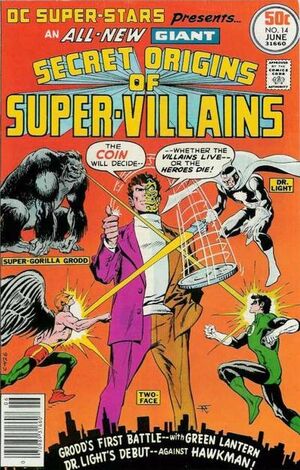 Appearing in "G-- as in Guardians, Green Lantern and Gorilla Grodd!"Edit

Synopsis for "G-- as in Guardians, Green Lantern and Gorilla Grodd!"Edit

Green Lantern is on Oa where the Guardians tell him that they (jointly) are responsible for unleashing a menace on Earth. To demonstrate this, they show a "video" of Green Lantern's mission to Calor (originally from Green Lantern #1: Planet of Doomed Men). In that adventure Green Lantern fought the Dryg. Recognizing the creature came from a volcano, Green Lantern traps it by creating Liquid Oxygen and freezing it. In this tale, however, the adventure was watched by a sentient gorilla (later revealed as Grodd), who returns to Gorilla City. Apparently on this planet, man evolved into gorillas. Gorilla City was endangered by the volcanic activity and considered themselves doomed. But Grodd informs Solovar that, if all the gorillas work together, they can tap into the ring's energy and use it to transport Gorilla City to Earth. In transit Grodd demands to be made leader because he thought of the city-saving solution. Denied, Grodd attacked Solovar and during the turmoil, the gorillas lost control of the ring's power as planetoids began to hit the city. One took down Grodd and Solovar led his people to refocus their minds resuming the ring's protective power. Once relocated on Earth, Solovar vows that they should claim their origins were from Earth (fearing a return to Calor), but Grodd was still able to siphon Green Lantern's ring's energy to make good his escape. Grodd then sends a mental summons bringing Green Lantern to him where Grodd attacks. Grodd is unable to remove the ring but can still use the energy. He creates a giant duplicate with which he attacks Gorilla City but Green Lantern stops him by encasing him in ice as he did the Dryg. Then Solivar uses his own mental powers to make Green Lantern forget everything. The Guardians then admit they told Green Lantern the truth since Gorilla City is now more commonly known.

Police Detective David Davis goes to Arkham Asylum to enlist Two Face's help. Davis relays to the doctor on call how Maroni threw acid on District Attorney Harvey Dent's face, scaring him and making him Two Face. Maroni had a two-headed silver dollar that was his good luck piece. Harvey takes it and scars one side. Two Face agrees to hear what Davis has to say and tells Davis to flip the coin. It comes up clean so Two Face agrees to help. Davis reveals that the acid Maroni threw was meant for him, not Dent. Davis tells Dent he needs help recovering evidence that Dent had possessed before the accident. The doctor releases Two Face to Davis' custody, and the two men proceed to the Police Storage Warehouse where Two Face finds his old desk and reveals a secret compartment with the evidence. Maroni shows up (looking for $50K he had hid in other confiscated evidence) and Two Face attacks him. During the struggle, Two Face's coin slips free and lands scarred side up. Because destiny has told him to switch sides, Two Face offers to give Maroni the evidence in exchange for $22,222.22. Davis reveals that he knew Maroni would be there (as he was released earlier that day) and he recruited Two Face to help get him. Both sides plead their case and Two Face flips the coin to see who lives. While the coin flips, Maroni attacks Dent whose gun goes off. The bullet hits the coin, deflects and hits Maroni killing him. The coin lands good side up and Two Face agrees to return to Arkham peacefully.

Appearing in "Let There Be Dr. Light!"Edit

Synopsis for "Let There Be Dr. Light!"Edit

Arthur Light designs an unnamed device which he calculates will capture and display lightwaves through time and space showing him glimpses of the future. He quickly realizes that it isn't the future he sees but an alien planet. He also realizes that his device serves as a portal and he bursts through the screen and grabs some technology. A Thanagarian police officer (Katar Hol) is summoned and, using residual energy, is able to recreate the portal through which he travels to Earth. Now calling himself Dr. Light, Arthur uses his technology to go on some sort of unspecified rampage but Hawkman arrives moments after he dons his costume. They fight but Dr. Light escapes. Hawkman returns to his lab and finds the original technology Dr. Light stole. He returns it to Thanagar.

Retrieved from "https://heykidscomics.fandom.com/wiki/DC_Super-Stars_Vol_1_14?oldid=1499995"
Community content is available under CC-BY-SA unless otherwise noted.