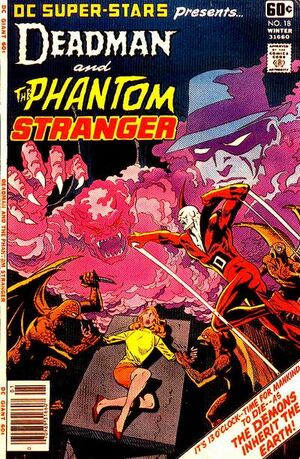 Strange occult forces are gathering once more on Halloween in Rutland, Vermont. Deadman is drawn there where he thwarts an intended invasion of demonic gargoyles who hope to hatch their brood and conquer the Earth. Guided by Rama Kushna, Deadman manages to destroy the two gargoyles and their eggs possessing the body of their intended sacrifice and using her body to destroy the eggs and blow up their cave.

Meanwhile, Dr. Thirteen and his wife Marie are invited to the home of Tom Fagan, when he is confronted by the Phantom Stranger who warns him of great evil, even though Thirteen once again dismisses the Stranger as a charlatan. Later as the Stranger is incapacitated by an attack by Tala, Dr. Thirteen and his wife are invited to dinner with Tom, and finds that everyone is under the control of a demon that is exerting its influence out of a strange black mirror. With the spiritual guidance of the Phantom Stranger, Dr. Thirteen smashes the mirror, severing the demons link to the Earth and freeing the others.

Finally, Phantom Stranger and Deadman join together to battle Tala, during the fight the Stranger manages to overpower his long time foe and return her below the surface of the Earth.

Retrieved from "https://heykidscomics.fandom.com/wiki/DC_Super-Stars_Vol_1_18?oldid=1422142"
Community content is available under CC-BY-SA unless otherwise noted.