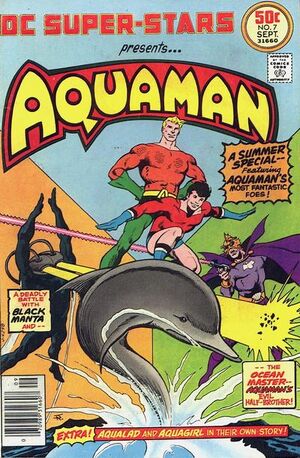 Easy, sweetheart... who's the guardian of Atlantis? You're looking at him... the guy you married -- me!

Appearing in "Between Two Dooms"Edit

Synopsis for "Between Two Dooms"Edit

Aquaman, Aqualad and Mera notice a strangely-shaped submarine descending upon Atlantis. Aqualad wants to attend Aquaman in investigating it, but Aquaman insists that he stays behind to watch over the others. Aquaman torpedoes himself towards the vessel, but upon making contact with it, discovers that the hull is bio-magnetic. He is stuck to the ship as it disgorges the Manta-Men, creatures in service to his old foe, Black Manta.

With Aquaman trapped, Manta initiates the next stage of his plan. He releases a chemical into the water, which forms a molecular bond with the protective dome surrounding Atlantis. As the chemical begins to seep through the dome and into Atlantis, Mera leads the evacuation and uses her hard-water powers to protect her son.

Aquaman finally frees himself and returns to the city. They are forced to flush out all of the contaminated water, forcing everyone remaining behind to breathe oxygen instead of water. The Atlanteans can only remain out of the water for up to one hour. At Aquaman's urging, Vulko initiates Project-X. Project-X is a serum that will transform Atlanteans into air-breathers. Aquaman, Aqulad, Mera and Aquababy do not take the serum, so that they can remain behind to defend Atlantis. Vulko begins inoculating the other Atlanteans.

To complicate matters, Aquaman's evil brother, the Ocean Master, returns to Atlantis. Although amnesia prevents him from recognizing Aquaman as his sibling, he still feels that only he may be the one to ultimately defeat him.

Black Manta manages to kidnap Aquaman's son, Aquababy and holds him ransom aboard his sea-saucer. He gives Aquaman an ultimatum: He will release Aquababy if Aquaman surrenders to him. Aquaman has little choice but to comply with Black Manta's demands. However, it is the Ocean Master who intercepts Manta's ship and saves Aquababy. He then turns his vessel towards Black Manta's saucer and opens fire. The two villains continue to fight one another with Aquaman caught in between. Manta gets the drop on Aquaman, but Ocean Master emerges from his own ship and attacks him. The two continue battling, enabling Aquaman and Aquababy to get to safety. As the fight concludes, Ocean Master manages to escape. Black Manta's final fate is unknown.

Appearing in "Some Call It Noise"Edit

Synopsis for "Some Call It Noise"Edit

Retrieved from "https://heykidscomics.fandom.com/wiki/DC_Super-Stars_Vol_1_7?oldid=1422132"
Community content is available under CC-BY-SA unless otherwise noted.