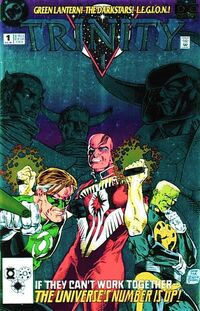 On Scylla, Hal Jorden encounters a giant woman who calls her self Quarra the Creator and is altering the surface of the planet. Unable to defeat her she leaves to join her companions. Returning to Oa Hal is stunned the Guardians react with fear to his construct reconstruction of her and is informed by the Book of Oa that before the people of Maltus even had reason they were ruled by the Triarch gods Quarra the Creator, Archor the Sustainer, and Tzodar the Destroyer. After killing their father, Daalon they leave Maltus vowing that they would one day return...and remake the universe.

The Darkstars discover Elyrion being laid waste by Archor the Sustainer who they are unable to stop. Eventually, tired of their interference, Archor leaves.

L.E.G.I.O.N. who has bee hired as a police force for overcrowded Maltus, which Vril Dox used as a ay to do archeological work and learn more about the race from which the Guardians and Controllers came from. However, Tzodar the Destroyer shows up on Maltus.

Soon it is revealed that the real Quarra, Archor and Tzodar had been ordinary beings and the three being they have been fighting are the creations of a Controller. The Controller quickly takes control of his creations by saying he is Daalon and ordering them to cleanse the planet. Hal Jordan realizes that against Triarch the three groups are useless but against the Controller they have a chance redirects the attack on Daalon.

The results of the tactic causes the Triarch to doubt their divinity and then via projected images the Guardians and Controllers inform them of the truth. Enraged the Triarch turn on Daalon and apparently destroy one another but turning Maltus into a paradise as a result.

The three groups work out an agreement with the Darkstars getting individual districts as planetary protectors while L.E.G.I.O.N. would protect worlds with which it had a contract. The Green Lantern Corps would be limited to the internal affairs of the planets.

Retrieved from "https://heykidscomics.fandom.com/wiki/DC_Universe:_Trinity?oldid=1562851"
Community content is available under CC-BY-SA unless otherwise noted.