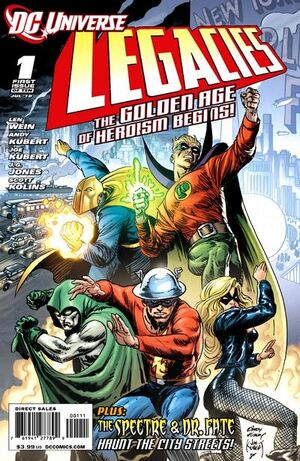 Why put on a mask and fight crime? And why so many of them, all at once? I wondered if I'd ever know...

Appearing in "In the Beginning..."Edit

Synopsis for "In the Beginning..."Edit

In an retirement home, an aged man name Paul Lincoln is an admirer of superheroes who contains a collection of newspapers and magazines featuring superheroes, as he recounts his years of following the exploits of superheroes throughout the ages. Paul narrates of his young life in the 1940s where he lived in Metropolis alongside his delinquent friend Jimmy Mahoney and Jimmy's sister Peggy. He and Jimmy collect protection money for the local crime boss in Suicide Slum. Everything changes when strange crime-fighters wearing masks begin to show up. Paul began collecting newspapers on the strange mystery men and a year later, while walking through an alley of another local mob, he witness those same mobsters being taken down by the original Atom and Sandman. Paul warns the Atom in time just as a mobster is about to try and get the drop on him. The Atom thank him out of gratitude and give Paul his business card to call him, whenever there is trouble. That encounter would leave a great impact on Paul, who decides to seek out a more honest line of work, but Jimmy is not interest to be a part of it. In which Paul respond to his friend's answer by showing a magazine of the Justice Society of America and other heroes will.

'Scoop' Scanlon and his trusty photographer, Rusty James, investigate the actions of Doctor Fate and The Spectre and discuss whether they really have any special abilities or whether it's all just one big trick.

Retrieved from "https://heykidscomics.fandom.com/wiki/DC_Universe_Legacies_Vol_1_1?oldid=1422143"
Community content is available under CC-BY-SA unless otherwise noted.