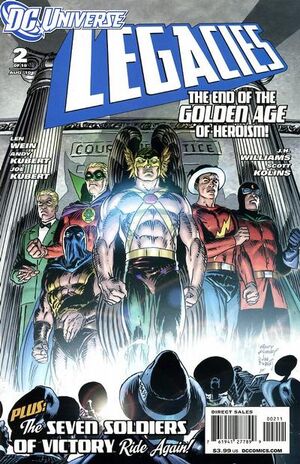 Once the Justice Society went public, they started to turn up pretty much everywhere.

Appearing in "The Golden Age"Edit

Synopsis for "The Golden Age"Edit

After his run-in with the Atom, Paul straightened his life out and became a paperboy for the Globe-Leader, just as the Justice Society started to come into its own. He has another fateful encounter with a hero in the form of the Guardian and the Newsboy Legion, who save him from a group of punks trying to collect protection money. In high school, Paul begins dating Peggy and runs into Jimmy, who's now a member of a local mob, the Injustice Gang of the World, run by Vandal Savage, only to end up on the run after the JSA takes the Injustice Gang down. Paul then works his way through college, graduating at the top of his class. Afterward, Paul and Peggy witness the television news that JSA have been discussed by the House Un-American Activities Committee and are told to reveal their identity, which the JSA refused and disappeared in a flash of light, thus signalling the end of the "Golden Age of Superheroes".

The Seven Soldiers of Victory respond to an advertisement in the newspaper challenging them to stop several robberies that all occur at the same time. Eventually, it is revealed the robberies are merely distractions orchestrated by the perpetrator of the crimes, the Dummy, in order to steal valuable Markovian artifacts. Fortunately, the Seven Soldiers foil the robbery and capture the Dummy.

Retrieved from "https://heykidscomics.fandom.com/wiki/DC_Universe_Legacies_Vol_1_2?oldid=1519902"
Community content is available under CC-BY-SA unless otherwise noted.