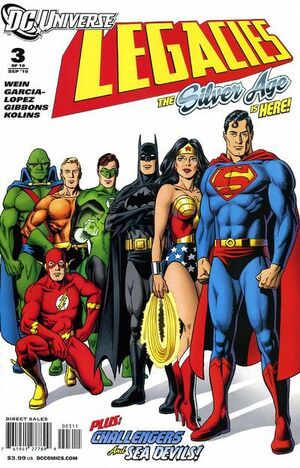 The world took a sad turn after the disappearance of the J.S.A.

In the years following the disbanding of the JSA and the rise of the Red Scare, Paul tells that for the next decade there hasn't been any appearance of a costumed vigilante which spells the end of the Mystery Men. However, there are still people who were desperate to find new heroes to those that they have lost, and new role models to look up to such as the resurgence and captivation of the Wild Western culture and heroes such as Pow-Wow Smith, Matt Savage, Tomahawk, Nighthawk, and the Trigger Twins.

As adults, Paul and Peggy discovers from the latter's mother that Jimmy is a part of display armed criminals, who have been working with a group of highwaymen that get taken out by the Blackhawks. Paul also overheard the adventurer superheroes with no secret identity as the Challengers of the Unknown, Sea Devils, and Cave Carson and his team making their debut. While Paul reads the newspaper's headlines, he learns that Jim Harper, the Guardian, is dying, and taking inspiration from his encounter with the Guardian, decides to become a police officer. After graduating from his police training, Paul ask Peggy to marry him, which Peggy accepts. Several months later, he is partnered with John Jones, and participating in a police crack down in a warehouse, where Paul confronts and reunite with Jimmy. Jimmy tries to convince him into letting him go, reasoning that he have a wife and expecting son; however, Jones arrives and arrests him, and Paul vows to see that Jimmy learns his lesson after some time behind bars. Soon, Paul approaches Peggy who learns about her brother's arrest, in which he express his remorse for Jimmy's predicament and even willingly to call off the marriage to ease Peggy's feelings. But, Peggy reassures to Paul that there is no reason to apologize and what happened with him and Jimmy was inevitable, and decide keep their marriage.

Weeks following the marriage, Paul learned the newspapers' headline that the Guardian had died, while he is assigned a new partner, Nelson Bell, who is skeptical all about the superheroes, after Jones becomes an detective. Years later, Paul becomes excited over the news of a newer generation of superheroes after witnessing Superman in action and the arrival of Batman. Later, Peggy gives birth to their daughter at the same time Wonder Woman makes her debut, which inspires Paul to name his daughter Diana. The world watch as more heroes had taken the predecessor place of the Flash and Green Lantern, including other heroes such as Aquaman and the Martian Manhunter. While their presence are known, and as they, along with the other heroes, gather together as the Justice League of America.

Retrieved from "https://heykidscomics.fandom.com/wiki/DC_Universe_Legacies_Vol_1_3?oldid=1737832"
Community content is available under CC-BY-SA unless otherwise noted.