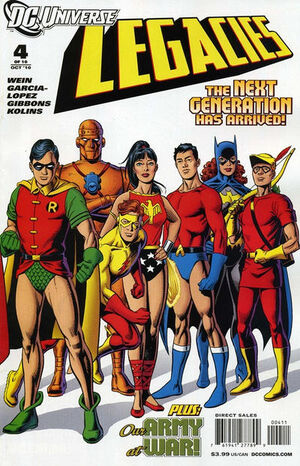 The return of the Mystery Men soon brought something we hadn't seen much of before...the costumed kid sidekick.

Appearing in "The Next Generation!"Edit

Synopsis for "The Next Generation!"Edit

Paul continues to witness the energy and excitement of the new dawn of heroes, from the debuts of Green Arrow and then another predecessor of the Atom, to the resurgence of both the kid sidekicks of Robin, Kid Flash, Aqualad, Wonder Girl, and Speedy, which form the Teen Titans, and superheroes' rogues gallery of super villains, to the later debut of strange heroes such as the Metal Men and the Doom Patrol. Paul's becomes even more excited after seeing a news story about the JLA are teaming up with the JSA, who decide to come out of retirement. Meanwhile, he continues to visit Jimmy in prison and speak on his behalf at his parole hearings. Jimmy is by now, has thought back over the mistakes he made, and vows to reform. More heroes debuts around this time in the form of Batgirl and Hawk and Dove; however, Paul, Peggy, and Diana are witnessing the end of the dawn of superheroes while on vacation in New York as they see the death of the Doom Patrol on national media where they are apparently killed by General Zahl in order to save the small fishing village of Codsville.

Retrieved from "https://heykidscomics.fandom.com/wiki/DC_Universe_Legacies_Vol_1_4?oldid=1422146"
Community content is available under CC-BY-SA unless otherwise noted.