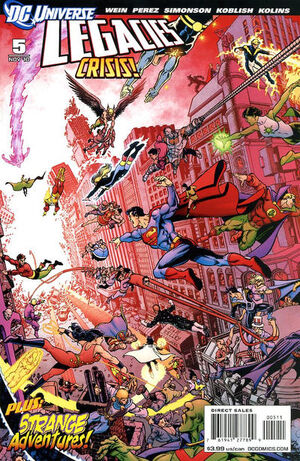 With the deaths of the Doom Patrol, the world moved in a dark and deeply disturbing direction.

Paul notices how things have started to go in a darker direction such as the Joker acting more maniacal and actually killing people, including his own men with Joker Venom, the Spectre is taking out his own brand of vengeance on even the most petty of crimes, while trying to reassure his daughter Diana that heroes are still heroes no matter what they look like after witnessing Green Arrow's new change of look. Meanwhile, Jimmy is finally released on parole, and takes a security job at S.T.A.R. Labs. Paul confirms Jimmy's reformation during a battle between Superman and Chemo, after he learns that Jimmy evacuated the labs' staff on his own, saving nearly everyone in the process. More heroes are debuted as the year is progress, including the new Doom Patrol, Firestorm, and the New Teen Titans. Paul is later surprised by Batman's resignation from the Justice League and his formation of the Outsiders, and even more surprised with the appearance and predecessor of heroes such as the Blue Devil. Paul has Jimmy, his wife Helen, and their son Ted over for dinner just as the Crisis on Infinite Earths begins. Paul is called into duty on the streets to help save civilians, and have Jimmy to take the rest of the family down into the basement of their house for safety. He then joins with Nelson and the rest of Metropolis police and bear witness to the chaos of the Crisis, as well as more heroes from all eras, some of whom people had never seen before, also helping in the rescue effort, unaware of the bigger threat to come.

Space adventurer Adam Strange waits for a Zeta-Beam in Sydney, Australia to be beam to Rann. After being struck by the Zeta-Beam, Strange only materialize into a warzone on an unknown planet where he is join among a group of adventurers like himself: Tommy Tomorrow, Captain Comet, Space Ranger and his sidekick Cryll. Apparently, Strange and the others are transported from their various normal eras into fighting an opposing group of alien foes that are familiar to Strange, consisting the Faceless Hunter, Dust Devil, a Vantor, and the Invisible Raider as part of a wagering dispute. With the help of Cryll, Strange defeats the Vantor and Dust Devil.

Though the adventurers realize that even if they defeat their opponents, whoever brought them there will send in more unwitting pawns to continue their manipulative game, and needs to find the true culprits to end this. Fortunately, Strange deduce the location of their manipulators to be in the only untouched and undamaged structure left in the battered landscape. After defeating the Faceless Hunter and Invisible Raider, the heroes find the masterminds behind the game to be Kanjar Ro and Hyathis. The heroes coerced Kanjar Ro into sending them back to their respective eras, in which Strange arrives on Rann and is reunited with his love Alanna.

Retrieved from "https://heykidscomics.fandom.com/wiki/DC_Universe_Legacies_Vol_1_5?oldid=1422147"
Community content is available under CC-BY-SA unless otherwise noted.