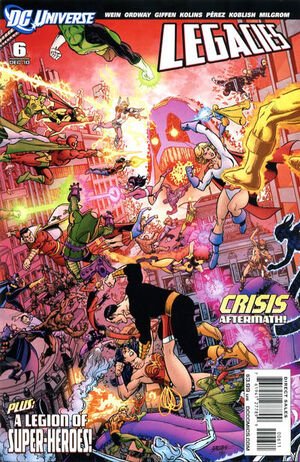 All things considered, it was a hell of a day.

Paul is just awed by the number of heroes helping in the rescue during the Crisis, as well as the Flash's disturbing disappearance right in front of their eyes. Paul then goes to help a woman trapped under some debris and gets help from the Guardian, who for years he believed dead while in his identity (unaware that he was cloned by Project Cadmus). He tries to reintroduce himself, who he believes is Jim Harper, only for the Guardian to intend to him that Jim Harper is dead. He then reminds Paul that they still have lives to save, and go their separate ways. When Paul goes to help the casualty, the Guardian is secretly congratulating Paul for the man he has become. Meanwhile, in the Lincoln's basement, Jimmy decides to go check up, until the foundation caves in on him while he climbs the stairs.

Back in Metropolis, Paul and Nelson continue to aid in the rescue effort, and see the Anti-Monitor for the first time, watching as all the heroes fly in his direction for a final showdown. The skies turn back to normal as everyone breathes a sigh of relief, as the Crisis is finally over. Later, Paul reunites with the rest of the family at the hospital where Jimmy was taken to, and learns that due to his injuries that he will never walk again.

After a period of rebuilding, things return to normal, with Paul watching a news report on the formation of the Detroit-era Justice League an error, since they formed before the "Crisis on Infinite Earths", criticizing it for being a "third-string little league". For the first time in his life, he begins to question if the heroes know what they are doing, despite being reassured by Peggy. Paul and Nelson watch G. Gordon Godfrey, which Paul's dislike to Godfrey about the outlaw of any superheroes activity, citing that if it was not for the heroes, then the Crisis would have been the end of it all. Just as Nelson is about to make a point, the two get called to gear up, as the entire police force heads out to confront Brimstone just as he attacks Metropolis. Despite being nearly incinerated, Paul and Nelson are rescued in the nick of time by the JLA. The League makes a valiant effort against Brimstone; however, his power is too strong, and Paul and Nelson are awestruck when they witness it defeat the League with ease.

After Brimstone disappears, Jimmy and Paul witness a news report about an angry mob ganging up on Robin and nearly beating him to a pulp. Jimmy is touched by this, hoping that Robin does not end up like him, crippled and bitter. Paul convinces to reassure Jimmy that he will always be there for him, no matter what. Later, he learns of Brimstone's defeat by the Suicide Squad, now a team made up of both heroes and coerced villains. Around this time, the president outlaws superheroes appearing in public, and the JLA disbands. Subsequently, Paul hears Godfrey leading his followers at a rally in Washington, D.C. to overthrow the government, along with backup in the form of Apokoliptan Warhounds and Parademons; however, he is thwarted by a group of heroes made up of Doctor Fate's invitation. They then decide to reform the Justice League, at Doctor Fate's invitation, something Paul sees as "legends reborn". Weeks after the event, Paul and Nelson are promoted to detective, but things turn grim when they see a news report on the Joker being confirmed to have shot and crippled Barbara Gordon.

After a young Clark Kent helps Jonathan Kent in fixing a combine and doing some chores, he is visited by Saturn Girl, Lightning Lad, and Cosmic Boy of the Legion of Superheroes who wants to recruit him to become a part of the Legion and explaining him of his future heroic role as Superman. As Clark decides to join them, they are suddenly visited by another Time Sphere which contains a future and older version of Saturn Girl, Dawnstar, and Wildfire who tells the younger Legion that they cannot take Clark back to the 31st century as in their time a zealot known as Earth-Man built an revolution around a lie that Superman came from Earth instead of Krypton and stirred an alien-hating frenzy that banished all alien lifeforms from Earth. Instead, the older Legion need to bring Clark to their time to ramify the situation. However, they are interrupted by another Legion led by Brainiac 5 who needs Clark in rescuing their Legion that are being held captive by Roxxas. But soon after more Time Spheres began appearing and more future versions of the Legion have also come to approach Clark for his help and an argument breaks out as to which Legion receives Clark first. As the argument escalates Clark stop what they are doing and gaining their attention; in which he tells them that he is honored that they are all interested in him, but want them all to agree on something before coming back: he decide to finish his homework while the Legions will figure out their problem.

Retrieved from "https://heykidscomics.fandom.com/wiki/DC_Universe_Legacies_Vol_1_6?oldid=1422148"
Community content is available under CC-BY-SA unless otherwise noted.