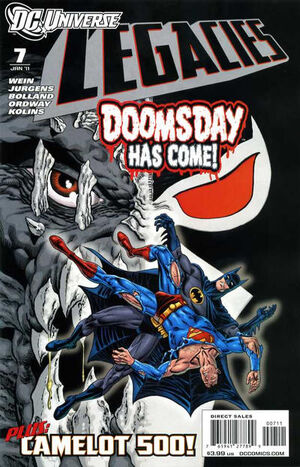 Paul notes that this tragedy once again "changed the rules of the game", as the loved ones of superheroes were now becoming prime targets in the wake of Barbara Gordon's ordeal with the Joker. He begins to wonder how, if his daughter Diana (now a teenager) was harmed by a criminal of any sort, he would not hesitate to kill him.

Years later, he and Nelson are at Metropolis headquarters where they see a news report that Bane has broken Batman and toss him over a roof. The chief warns them to be on the lookout for anything similar going on in Metropolis. At the same time, the alien monster known as Doomsday emerges in the Midwest, where it quickly takes down the Justice League, until Superman arrives to help them. Meanwhile, Jimmy takes Peggy on a tour of S.T.A.R. Labs, where he notices her hand shaking and her pale complexions, suggesting that she and Paul see a doctor. In Gotham City, the vigilante known as Azrael has taken over as Batman and goes after Bane, first wearing the traditional Bat-suit with armorer gauntlets. Back in the Midwest, Superman catches up to Doomsday and thrown him a great distance, until Doomsday lands 50 miles outside of Metropolis. In Gotham, Azrael engages Bane again, this time wearing his armor costume, and chases the strongman across town until finally defeating him aboard an elevated train that crashes into an abandoned building, where he leaves Bane for the cops.

At the Lincoln's house, Paul and Peggy call Diana into the living room to tell her something important. After visiting the doctor, it was revealed that Peggy has cancer. Peggy assures Diana, that since they think she caught it early, there will be a lot they can still do at this stage. Just then, Paul's phone goes off, and when he learns why he is needed he reluctantly heads over to downtown Metropolis to join the police force in confronting Doomsday while Superman's still fighting it. When Superman is stepped out of the way to move Lois Lane and Jimmy Olsen away from the fight, Paul and Nelson distract Doomsday by firing at him with their guns. Superman then speeds back to finish off Doomsday once and for all, until both fall, still and unmoving. The Justice League arrived too late just to realize that, and Paul tells of how everyone felt once they saw that Superman, has died "the most honourable, most decent of us all".

Ray Palmer is invited by Professor Alpheus Hyatt to his lab where the latter shows Ray a gold coin engrossed with the face of the sorceress Morgaine le Fey. Professor Hyatt explains he receive the coin from fishing it out of his Time Pool, but find no historical record about the coin's existence from the Arthurian period. Given that such a coin struck, Morgaine Le Fey would have to been ruler of Camelot in which it never have ever happened. Professor Hyatt decide to run upstairs to find more books to explain the coin's existence, while leaving Ray with the Time Pool. Thus Ray secretly becomes The Atom and travel back in time to Camelot through the Time Pool to learn the coin's origin.

The Ray finds himself in the middle of the Fall of Camelot, where King Arthur and his allies the Shining Knight and the Silent Knight battle Morgaine le Fey and her forces. During the siege, The Atom unexpectedly save King Arthur's life from an arrow. Morgaine boasts to her half-brother that the battle favors her and toss a coin to Arthur bearing her image, claiming Arthur's realm as her own. However, Arthur boldly refutes to Morgaine's arrogance and, with no other choice, having Merlin to summon the demon Etrigan to tip the battle. The Atom then hears a bell coming from Professor Hyatt's fishing gear, and knowing the Professor is back quickly grabs a coin bearing Arthur's image as a souvenir for his colleague as he rides back on the fishing line back to his time.

Ray changes out of his costume and discretely reunite with Professor Hyatt, who he curiously shows the coin bearing Arthur's image to Ray. Ray then personally reflects on the major figures in the last days of Camelot that would later reappear in the present such as Shining Knight and Etrigan, and that the legend of Camelot will live on forever.

Retrieved from "https://heykidscomics.fandom.com/wiki/DC_Universe_Legacies_Vol_1_7?oldid=1422149"
Community content is available under CC-BY-SA unless otherwise noted.