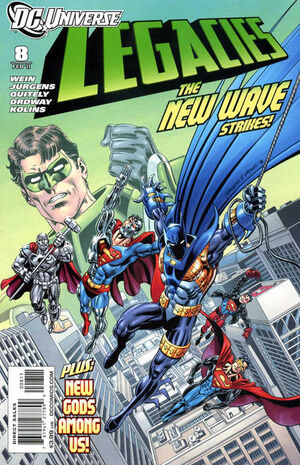 After the death of Superman, everyone in the world and Paul along with his fellow officers, are present at Superman's funeral. Meanwhile, Paul and his family learn from Peggy's doctor that Peggy has been responding well to all the treatments, and there may be a chance that she may recover from her cancer. Diana and Paul vow to support Peggy throughout this whole ordeal. Currently, in Gotham City, Batman is recovering and stops Azrael's brutality as Batman. In Metropolis, four individuals appear and claiming to be a reborn Superman: Superboy, Steel, Cyborg Superman, and the Eradicator. Paul and Nelson are called over to S.T.A.R. Labs to investigate the theft of an extraterrestrial exo-suit. A theft discovered by Jimmy. Nelson believes that one of the four "Supermen" may be responsible.

In Coast City, Mongul's spaceship appears over the city. Eradicator tries to set out to destroy alien spheres from being deployed, when he is struck from behind by Cyborg Superman, who uses Eradicator's energy to trigger the spheres, causing a massive explosion that devastated Coast City and its entire population. The remaining spheres then begin construction of a new Warworld, with the ship, controlled by Mongul as its heart. Back in Metropolis, the heroes are witnessing the return of the true Superman, who along with Steel and Superboy are set out to destroy the Warworld and take down the Cyborg Superman and Mongul. Green Lantern has return, intent on getting his revenge for Coast City's destruction. The Supermen, along with the revived Eradicator, confront Cyborg Superman, who inadvertently restores Superman to full power, whom he then defeats the Cyborg Superman.

A few days later, Paul, Peggy, and Jimmy attend Diana's high school graduation, and she tells them that she intends to go to medical school to become an oncologist, whom that she can help people like her mother. All three are proud of her for that, and soon all decide to get some lunch.

Meanwhile, Green Lantern is angered and attacks the Green Lantern Corps and the Guardians of the Universe after the loss of Coast City. After this, Green Lantern absorbs Oa's Central Power Battery of its power, which allowing him to become fully possessed and taking the name of Parallax.

Retrieved from "https://heykidscomics.fandom.com/wiki/DC_Universe_Legacies_Vol_1_8?oldid=1422150"
Community content is available under CC-BY-SA unless otherwise noted.