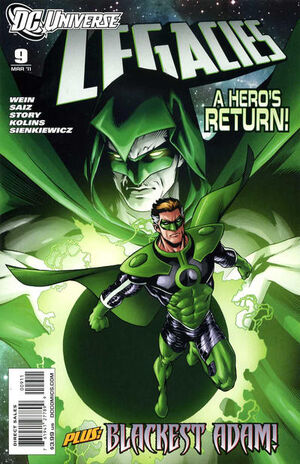 Appearing in "Knight After Knight"Edit

Synopsis for "Knight After Knight"Edit

Paul recalls on how calling those years a time of turmoil would be the understatement of the century. Despite the return of the true Superman and Batman, Green Lantern had gone rogue, leaving a path of destruction and death that could never be equaled, and then vanished for some time. Meanwhile, as Paul informs Nelson of news regarding Peggy's cancer being possibly cured, they witness the news report a battle between the new Green Lantern and Major Force on TV. Shortly after, a new bulletin comes out reporting of a spacecraft heading towards Metropolis harbor. Paul and Nelson head out with some of the police force, and get there just as the ship's pilot, a female alien named Dusk comes out. Gathering a large group of heroes together, she warns the arrival of the Sun-Eater, urging them to evacuate the planet before it will be destroyed. The heroes vow to stop this from happening.

Paul and Peggy watch the eclipse from their home, as their daughter Diana arrives. Peggy states that if it really is the end of the world, then they will face it as a family. All three go inside, where Paul turns on the television of a news report about the Sun-Eater. The heroes are trying to find ways to destroy the Sun-Eater; however, Parallax volunteers and offering to help, explaining he is doing all he ever wanted is to setting things right. Parallax sacrifices his life to reignite the Sun using his power to absorb that of the entity and saving Earth in the process. Afterward, Paul checks in on Jimmy, who is in rehab to get him walking again. The two talk about the missing exo-suit stolen from S.T.A.R. Labs in which it is still being looked for, despite the case being moved into the cold case files.

Several months later, Paul and Nelson go to check out another lead on the exo-suit; however, they witness an invasion of demons from Hell, led by the Spectre who had been possessed by the renegade angel Asmodel. Paul and Nelson calls for backup, and at the same time, the newly-reformed JLA arrive at fending off the demons. The newly formed Sentinels of Magic soon arrive and aid in the battle. The Sentinels open a portal to Heaven and come back with the soul of Green Lantern. He then leaps into the Spectre and drives Asmodel out, fully bonding with the Spectre. Green Lantern is vowed to change the direction of the Spectre's mission, from one of vengeance to one of redemption.

The wizard Shazam tells the history and origins of Captain Marvel and Black Adam. Since ancient Egypt, Shazam had sought to look for a successor to fight the good fight. At first he saw the Egyptian Pharaoh Kha-Ef-Re as his worthy candidate but came too late to find that he had been slain by his enemies. Centuries past as Shazam watched and waited, he was aware of the activities of Prince Khufu and Chay-Ara, and came to approach the former with the same offer but, again, they were killed by the evil priest Hath-Set and cursed to be reborn throughout the centuries as defenders of mankind - becoming the present day Hawkman and Hawkgirl.

Times past and Shazam witness Kha-Ef-Re's Blue Scarab later past on to Dan Garrett and becoming the original Blue Beetle, and finally finding Teth-Adam as his successor. Unfortunately, after years of serving justice Teth-Adam's enemies assassinated his family that drove him into a rampage and seizing the throne of Kahndaq for himself, forcing Shazam to imprison Teth-Adam's spirit and powers in a scarab of his own devise and entombed it in a pyramid where it remained undiscovered.

Millenia later the scarab was discovered by archaeologist C.C. Batson, his wife Mary, and their guide Theo Adam, a distant descendant of Teth-Adam. Theo Adam touched the scarab and gained his ancestor's persona, killing the Batsons and absorbing the powers from the scarab, transforming him into Black Adam. Thus, Shazam chosen the Batsons' son Billy into the world's mightiest mortal Captain Marvel. For almost countless times Captain Marvel clashed with Black Adam with neither side ever truly gaining a decisive edge, and Shazam enlisted others to Marvel's cause consisting Captain Marvel, Jr. and Mary Marvel. With the Marvel Family confronting Black Adam whenever he strikes, Shazam can only stay on the sidelines. But while watching through his Cauldron of Knowledge, Shazam saw terrible times up ahead and witnessing Black Adam's return as ruler of Kahndaq. Shazam personally concludes that giving the powers of the gods to individuals such as Black Adam stands as his single greatest mistake and can only pray that the world will survive long enough to one day see that the old wizard's mistake is corrected.

Retrieved from "https://heykidscomics.fandom.com/wiki/DC_Universe_Legacies_Vol_1_9?oldid=1422151"
Community content is available under CC-BY-SA unless otherwise noted.